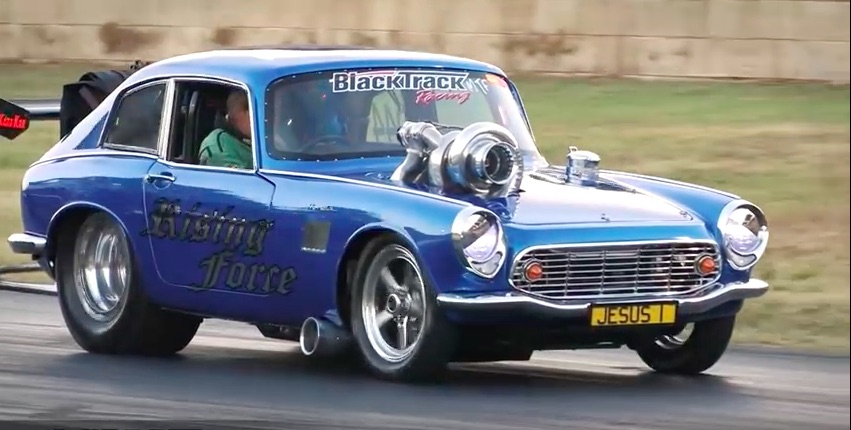 I am sure that there are some of you that will hate this car because it has a Honda body and others that will hate it because it as a Toyota 2JZ engine, but I am guessing that the vast majority of you will be in my corner with this deal and think that it is awesome. This tiny little coupe with all that turbocharger hanging out of the hood makes 1,000hp on 24psi of boost and it runs down in the lower eight second range with big MPH as you’d imagine. Limited on rear tire size, getting the car to hook and leave can be a bit on the difficult side and the video shows that. You will see some awesome runs and a couple of attempts that made white smoke on the hit of the throttle.

This is way more than just a couple of runs down the track. There’s a great walk around of the car to start with that includes audio of the driver/owner talking about all the different mechanical elements from the chassis to the transmission, engine and more. Then there’s the on track stuff and you’ll see in-car views, multiple runs, and even the car cruising back to the pit area.

We have seen Honda S600 roadsters or convertibles but we have never seen one with a fixed roof like this piece. The thing is basically a 3/4 or 1/2 scale version of a Jaguar XKE in our eyes but slightly more awkward. In fact when we first glanced at the video we thought it WAS an XKE and then were even more interested when it was not.

You’ll get the full scoop and all the info on the car in the video below. We’re loving this mean little thing. Are you?

Holley EFI Factory Super Car Purse and Contingencies Announced - Go Fast And Get Paid Unhinged: The ChallengerFest 7 Story - From Running Angry Grandpa Like A Rental To Racing With Good People