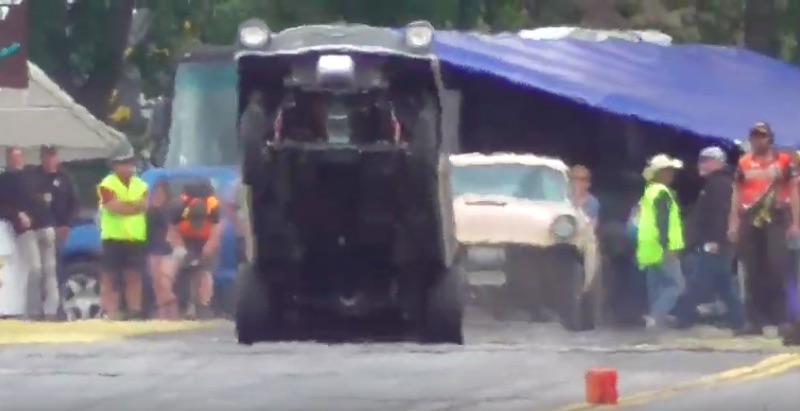 A four speed, a sticky track, and a classic high riding gasser can all add up to some magic in the world of drag racing and that is exactly what happened here. The video you see below was made at Meremere Dragway in New Zealand. We’re guessing that this was some sort of nostalgia drag race where the footage was captured but who knows. Anyway, we see a tri-five Chevy come to the line and pull a dry hop or two on the way to the beams. The car seems to be a 1956 Chevy with a 1957 nose on it, but maybe we’re missing something here or perhaps the models were slightly different down there. Dunno.

Anyway, when the driver stages, winds up the engine and side steps the clutch the car just goes vertical. No doubt surprised by this turn of events, the driver takes his foot off the throttle and the car lands on its beam front axle like a ton of bricks. You can watch the thing bend itself halfway to hell as the landing happens.

Undaunted and with a far more aggressively cambered set of front tires, the driver continues doe the track at full throttle and actually manages to get the front end into the air during a power shift as part of the run.

We have no idea who this guy is but it seems like he’d be a lot of fun o enjoy a beer or two with!

It's National Stick Shift Day! Go Out There, Dump The Clutch, Bang Some Gears, And Teach Someone Else How To Drive A Stick!!! Stop Wasting Material: These Three Tips For TIG Welding Joints Will Save You Material And Some Headaches

3 thoughts on “Wild Video: Watch This Kiwi Tri-Five Chevy Pull A Bumper-Stand, Bend The Axle, and Finish The Run”