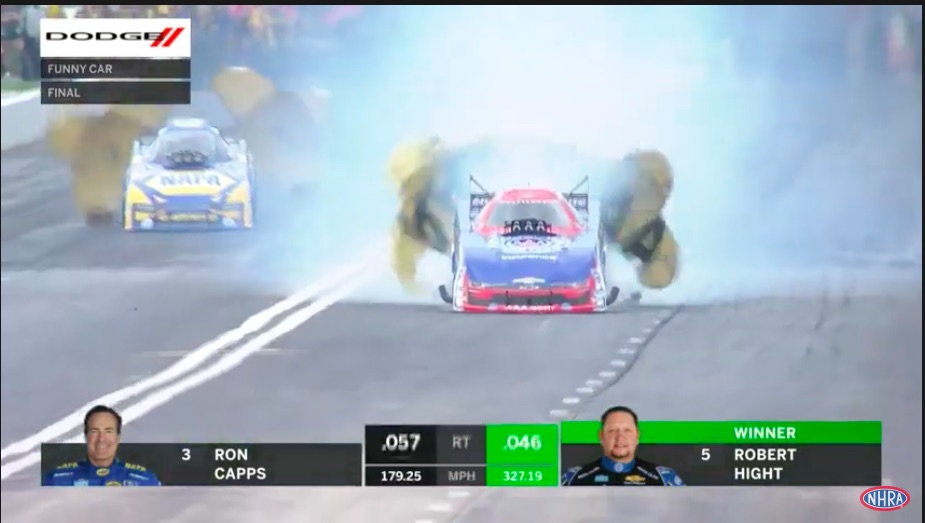 It was a battle of a weekend from end to end at Houston Raceway Park in Baytown, Texas just a few days back. The event was run between rain storms and ultimately the vast majority of eliminations had to be run on Monday as after seven pairs of top fuel dragsters went down the track to start the day, the heavens opened up and did not relent until that night. Officials decided that the best course of action was to pickup where we left off on Monday morning and that’s exactly what the NHRA Camping World drag racing series competitors did.

In pro stock, Matt Hartford sawed through the field and managed to beat Deric Kramer in a tire shaking final round that saw both cars basketball the tires early but Hartford was able to gather it up quickly and run to a 7-second elapsed time and the victory. In nitro funny car, Robert Hight got his first comeback win after sitting the vast majority of the 2020 season out, beating Ron Capps in the final and getting John Force Racing its second win in as many races. In top fuel, it was Doug Kalitta and Steve Torrence with Kalitta smoking the tires at the step of the throttle and the Torrence collecting his third win in five races so far this season.

The next event on tour is the TascaParts.com NHRA New England Nationals presented by Bandero Premium Tequila at Epping, New Hampshire’s own New England Dragway. That one is coming up June 11-13! Check out all the final round action below!