Best Of 2014: This TV Camera Man Had Never Been Around A Top Fuel Car Before – His Reaction Is Priceless 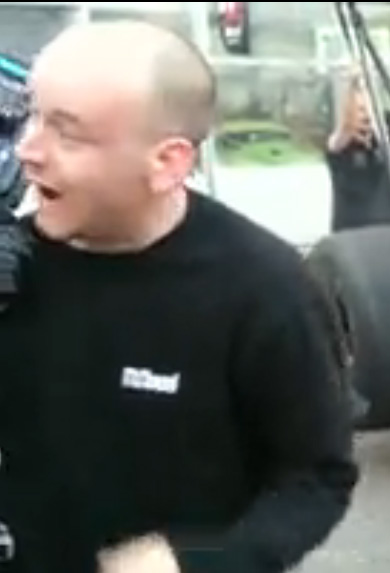 One of the great pleasures of being a drag racing fan and announcer is the ability to “introduce” nitromethane into people’s lives that have never experienced it before. As much as you try and describe what people are going to see, hear, smell, and feel, there are no words to do it justice and everyone kind of takes it in their own stride. Some people get really freaked by it and kind of cannot handle the full frontal assault anything running on nitro presents to them. Others, like our own Nutting take it in full stride (even if he ran away a couple times). Dave shot the NHRA New England Hot Rod Reunion last year and did a fine job, all the while experiencing nitromethane powered drag iron for the first time.

The other side to this coin is the sneak attack method of introduction where the person has no clue what’s coming and you get to see an honest reaction out of them with no influence from the outside world. That’s where the camera man falls into in this video. Obviously he was sent to this event where a top fuel dragster is being warmed up somewhere in Europe and we’re guessing he isn’t a racing fan. He’s up close to the car with no ear plugs in which is a good indication we’re dealing with a rookie here and secondly, when the crew chief cracks the throttle blades with his hands and the car wings up quickly the guy is literally blown off balance and quickly exits stage left with the clear expression of a man who has just crapped his pants. We’re talking a full load here. The man’s eyes almost leap out of his head like you see in the cartoons.

We can only imagine that conversation when he handed the tape into his editor later that day. “Hans, we watched the tape. Did something happen there to knock you off balance?” Hans would reply, “Yes sir, I crapped my pants.” He would then be mocked and fired.

Post by Andy Klossner.
Best Of 2014: Watch This Huge Chevy Truck Battle The Weight Sled To The Death - The Most Hard Fought, Driveline Twisting Pull We Have Ever Posted Best Of 2014: SNL's Series of Lincoln Parody Ads Starring Jim Carey Are Hilarious And True

7 thoughts on “Best Of 2014: This TV Camera Man Had Never Been Around A Top Fuel Car Before – His Reaction Is Priceless”