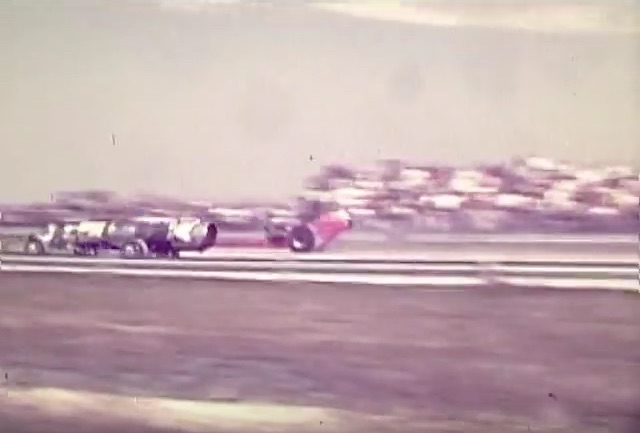 Ahhh, match racing. The fabled way for so many stars of the drag racing world to pay the bills and make cash with their hot rods. It is vaudeville on four wheels with a schedule that’s 10-times as ugly but boy did it build star power. Getting your face and your car in front of crowds was the ticket to more bookings and more money. The whole thing was self-fulfilling back in the day. The more you raced, the more you made and guys like Tommy Ivo raced a TON.

He would compete with anyone, anywhere, anytime if the price was right and the fellas at Houston International Speedway came up with the dollars and the concept to have him at their track racing the famed Green Mamba jet cat of Doug Rose. The Green Mamba had a long and interesting run in the world of drag racing and other than repairs from crashes (one of which claimed driver Doug Rose’s legs) the thing did to change…at all.

To see video of the Green Mamba in the 1980s is to effectively see it as it is here. Huge J-79 jet engine, driver in a pod out ahead of it all, minimal protection, etc. All go and no frills, that was the ticket for the original jets (which excited for about a decade before this video was made) versus today where safety regs mandate more structural protection for the driver and all of that good stuff.

Tommy Ivo was driving his beautiful Woody Glmore chassis, Tom Hanna bodied dragster that he towed around the country in his glass sided truck. Ivo was the first man in drag racing to really understand the need for flash and dash in drag racing. His stuff always looked great, he was a flamboyant guy, and he never thought stuff like this was “beneath” him. Other racers of the period may have had more attitude and would avoid sideshow stuff like this but people loved it and it made TV Tommy Ivo a household name despite the fact that he did not win big events.

The footage here is amazingly clear. There’s no sound so just make the whooshing noise of the jet car ad the cackling rumble of the dragster and you’ll be set!

Watch The Weirdest Car Chase Of The 1970s - A Plymouth (and a Dodge) Vs An Opel In Hamburg, Germany! Classic YouTube: The Great Debate, Settled With This Fire Truck vs. Water Truck Race!