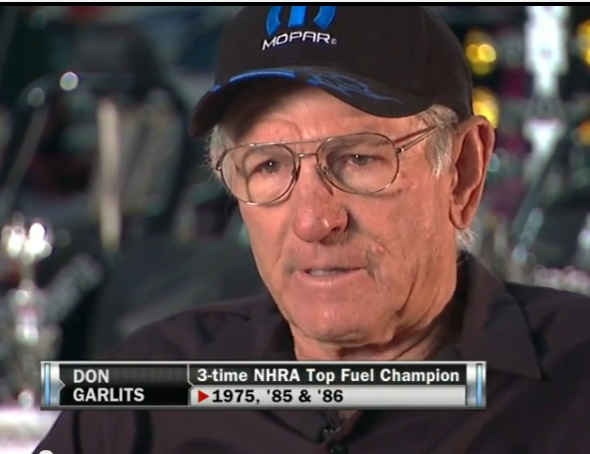 One of the moments that will be forever locked into my mind from the 2014 NHRA Gatornationals was when the blow video, which was also part of the ESPN telecast of the race was played during pre-race activities with Don Garlits on stage to see it. It was a moment that drew genuine emotion from everyone who was there to witness it because it was honest and real and it was honoring one of the greatest women who ever had anything to do with the sport of drag racing. I have long maintained the non-controversial view that Garlits is the best drag racer in history and won’t ever be moved from that perch but his wife Pat had as much to do with that as he did wheeling the car.

The video was made by the ESPN crew and Gary Gerould serves as the voice on the footage. All of that is pretty much not relevant because the true beauty in this piece comes in the form of the words Garlits uses to describe his wife of many decades along with her love and support. There is a reason that Don has kept a lower profile over the last couple of years than we have been used to seeing him have and that was because he was the chief caretaker for Pat who was progressively getting more ill and was unable to care for herself as Don knew she deserved. He put everything aside for her and he explains very clearly why he did that in this video. He is truly a good and honorable man. If Don Garlits were a landscaper, he’d have been the best landscaper that there was, same as for any occupation, it is just his nature. He turned all of that intensity and drive to Pat’s cause and we’re sure he feels as we do that it was the the most important thing he accomplished in his life. He gave her comfort and a familiar face until her last breath. The measure of a man is not how quickly he traverses a quarter mile but rather how he’s able to set aside his own ambitions and wants to serve a loved one in their time of need. The man is more a legend in our eyes now than he’s ever been.

Gallery: More Bonus Photos From The 2014 Detroit Autorama - Stuff You Have Not Seen Yet! Remembering Atomic Al: Steve Evans Interviews Al Hofmann Back in 1998