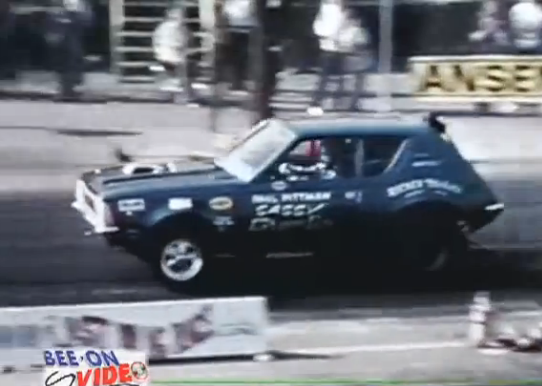 As much as nostalgia funny cars totally exploded on the drag racing scene over the last 10 years or so, gassers have been proliferating at a pretty impressive rate that only seems to be picking up speed as each year goes by. Unlike the funny car guys, lots of the gasser owners have formed themselves into groups like the Geezer Gassers, East Coast Gassers, AA/Gassers (from Ohio), The Nostalgia AA/Gassers, The Southeast Gasser Association, and on and on and on. These groups are being booked into race tracks to entertain fans regularly and while many of them tend to hang in their base geographic regions of the country, there is no doubt that race promoters see the value in having them and their awesome hot rods in to pack the stands and sell tickets.

This nine minute video is a clip of a longer 105-minute gasser opus put together by Jim Amos at Bee-On Video productions. We’ve showed lots of Jim’s clips here before, largely because they are so awesome and this one could be the best of all…no foolin’. What you’ll see when you press play below is clips of gasser runs (with sound) from tracks in every corner of the country. Literally from Epping, New Hampshire to Long Beach, California you’ll visit tracks that are still here today and many that have long since faded into the past. You’ll see awesome, and we truly mean AWESOME cars like Ohio George Montgomery’s turbocharged Boss 429 Mustang, The High and Mighty, The Gassy Gremlin, and literally dozens of local cars from said tracks that will knock your socks off.

What we like most about this video is the fact that is depicts what gassers actually were. Guys stick a straight axle under a 1967 Buick these days and call it a “gasser”. It isn’t. The cars that made up the class are on full display in their natural and historically correct habitat in this video so take note! The next time you see a guy with a pro street Willys, nose scraping the ground, and mondo-wide rear tires calling his car a “gasser” pull this video up on your phone and educate him.

We know that as a BangShifter, you “get it” when it comes to videos like this. It is a literally window into the past and we can’t thank Jim Amos enough to putting stuff like this out there for people to see. The nine-minutes that this video comprises is but a taste of the full 105-minute video you can order from Jim if you’d like to here. We’d be remiss if we didn’t provide that link. Enjoy this, revel in it, visit tracks that you can only see in old photos actually alive and in color through this footage. This is truly the good stuff.

PRESS PLAY BELOW FOR NINE MINUTES OF PURE GASSER GREATNESS –