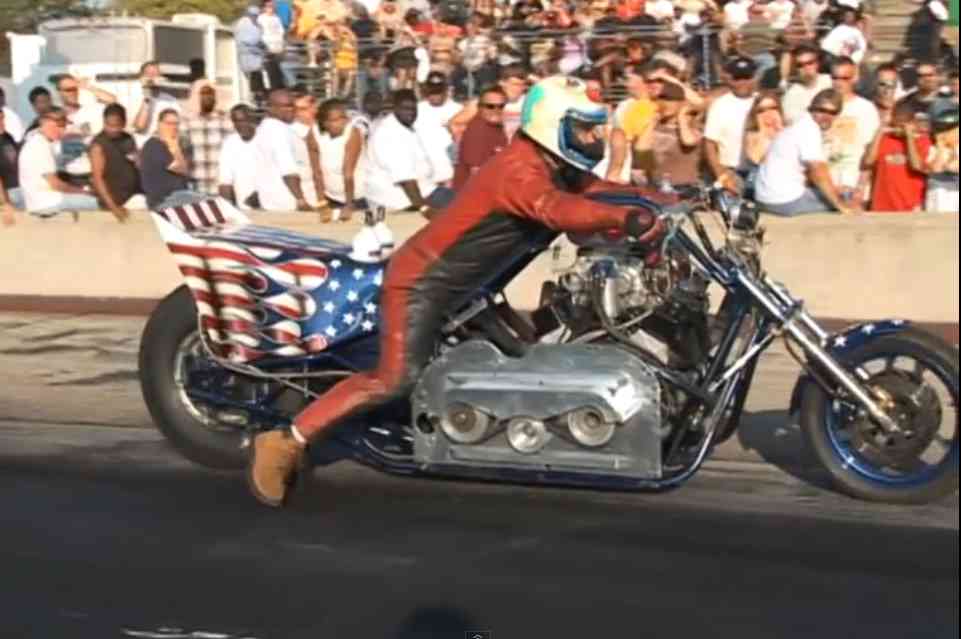 In the many, many drag races I have attended, there are moments that I can recall as if they happened yesterday. One of those moments came in 2002 when I attended the first Gasser Reunion at Thompson Drag Raceway in Thompson, Ohio. This machine is a long, homebuilt creation that uses a big drag slick at the back, some laid out forks in the front, a blown, alky burning small block V8 in the middle, and a crazed Ohioan named Mike Charlton as the literal cherry on top. No built to set records, no built to run anyone heads up, and not built to do anything other than put on an astounding show for fans, he calls (or at least CALLED) the thing Quasi-Modo. That weekend at Thompson he made a few passes and the act consisted of him firing up the motorcycle, rolling it through the water, and then opening the throttle to smoke the tire the whole way down the track. He didn’t stage, he simply blazed. People loved it and to be honest, I did too. The EJ Potter comments will come but this is really something wholly different than Potter was doing. They are both V8 bikes but the methods are completely different.

These runs were filmed from multiple angles and that is a good thing because you get to see how balls out crazy this thing really is. Let’s just take one simple factor into consideration. The supercharger has restraints on it which is a good thing but it does not have a bag on it. That means if the thing backfires and the blower explodes, the thing catching pieces of the case and rotors will be Mike Charlton. That’s enough to convince us that the dude is crazy right off the bat.

As you will see, Charlton lines the bike up on the outside of the groove of the track. Again, the point here is to put on a show, smoke the tires and leave people wondering if he can do it again. The first run kind of goes according to plan and it is pretty nutty looking. The second run is where the fun happens because the machine shoots across the track and Charlton shows his skill by letting the thing do what it wants for long enough to calm the bike down so he can gather it back up and proceed down the track on the throttle. This is fun stuff and it makes me smile from ear to ear remembering that day in Ohio some 13 years ago now.

Oh, and why do people like watching stuff like this? EJ said it best when he told me, “People used to buy a ticket to see me kill myself and when it didn’t happen they would buy a ticket the next year expecting THAT to be the time it would happen.”

Awesome In-Car Video: Watch A Wingless Sprint Car Pull Huge Wheelies Off the Corners Of A Dirt Track! The American Powertrain Parting Shift: In-Car Video of a Dude Grabbing Gears With the Wheels Up