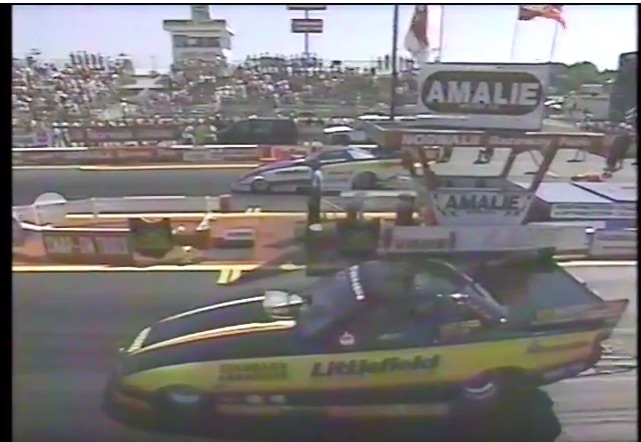 Anyone who has ever been to Summit Racing Equipment Motorsports Park in Norwalk, Ohio will tell you about how radically awesome the place is. The people that work there are great, the amenities are great, the dedication of the staff is great, and the leadership that the Bader family has exhibited over the years has been great as well. We’re racing the big NHRA Summit Nationals at the facility this weekend so we decided to take a look back and show you what Norwalk was like before the massive expansion and renovations happened those years back. In 1996 the track had already established its racer and fan friendly reputation but it was a far more modest joint in terms of side and seating capacity.

One of the track’s hallmarks, the large sign behind the starting line is present and even it seems to have expanded over the years. The current control tower is a building that sits on top of the massive right lane grandstand but back then it was a little building that sat just a couple of stories tall.

Back when I worked for IHRA, the World Nationals was our equivalent to Indy. One year the IHRA claimed 1,000 entries. I say claimed because I am not sure that we could have fit 1,000 cars, trucks, trailers, etc. The event was always a monster, kind of like the current NHRA event which is basically a 75% of the US Nationals affair.

You’ll watch Bob Varsha, Ted Jones, and Bret Kepner bring you the action from the likes of top fuel, alky funny car, pro stock, and of course pro modified. The pro mod cars are awesome because of the variety and because of the fact it is like an all-star, all time group of racers battling it out!

Tube Chassis Remote Control 1/5 Scale Sprint Car Build! How Cool Is This Thing With A Nitro Burning Engine And Everything! High and Mighty: You Are Going To Be Able To Buy A Modern Factory Version Of The Porsche 911 Safari Soon!