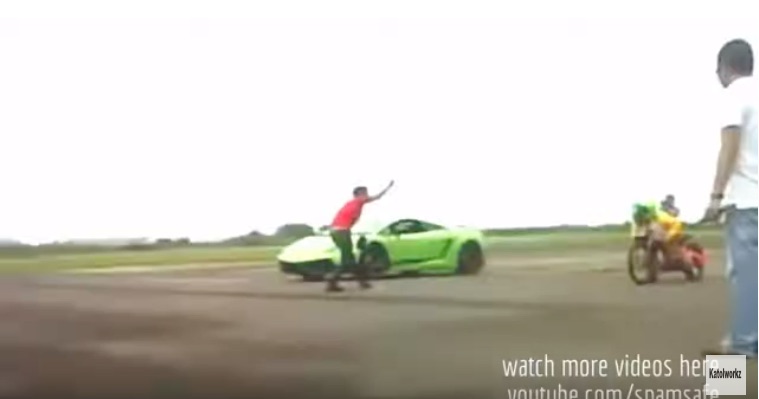 As we have told you many times, drag racing is the same but vastly different all across the world. The point of the exercise is the same, to get to the end of the track first. The means of conveyance though, boy does that vary. For instance, in places like Southeast Asia where two wheeled vehicles outnumber four wheeled vehicles by about 100:1, the sport is dominated by motorcycles. Actually, that is not true. The sport is dominated by hot rodded scooters.

Virtually everyone has a scooter to get around with. One of the most popular models is the Yamaha Mio, which is a 200lb, 8hp, CVT equipped means to zip around town. That’s how it starts, anyway. Hugely attended events see the quickest and fastest versions of these little motorcycle square off against each other. The facilities may not be The Strip at Las Vegas Motor Speedway but who cares. People come out in droves to see their heroes compete.

But how fast are the modified scooters? Fast enough to grind a Lamborghini into dust, that’s how fast. This video is proof. The rider, laid over the front of the bike to keep the nose down, puts a transatlantic gap on the Lamborghini and never looks back. This is awesome.

Press play below to see this most improbably drag racing defeat!

Look Back: This Review Of The 1982 Corvette Is A Study In The Overall Evolution Of The Nameplate Hold 'Er Down: Watch This Hot Rodded Western Star With Cat C15 Power Punish The Dyno Rollers