Watch a Fourth Gen Camaro Snap All 10 Wheel Studs and Lose Both Rear Wheels at the Strip! 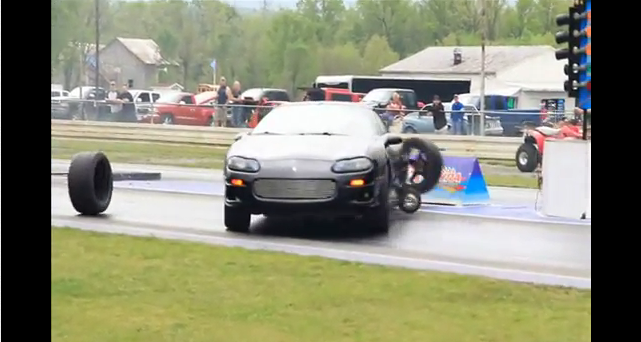 Wheel hop is one of the most violent sensations that you can experience in a relatively stock car. Anyone who has owned a Mustang Cobra of the SN195 variety has probably lived through it on the street or the strip. We sure know that we have. Instead of a Mustang, this video features a fourth generation Camaro experiencing severe wheel hop on the drag strip, which results in the wheel studs on both side of the rear axle failing and the rear tires leaving the program in pretty wild fashion. The poor guy in the car had to be wondering what the heck had just happened!

This video was filmed at Beaver Springs Dragway, in Pennsylvania. It is an awesome little strip that is totally retro and cool in just about every way. The place hooks like mad and “Beaver Bob” who runs the place is a kind of cult drag racing legend. You can actually see daylight under the rear tires as they literally bounce off the ground while spinning. The multiple shock loads placed on those wheel studs with the tire the jumping off the asphalt and then slamming back down so many times in so quick a fashion spelled a quick end for the studs.

Watch the whole video and you’ll see that the dude actually installed new studs at the track that day and was back at it by the end of the afternoon. That’s a killer, BangShift approved, never say die attitude! Good that the car was not hurt badly and the Camaro lived to fight another day!

The "WTF?!" Files: 1975 AMC Hornet, Meet BMW Z3 M Roadster! Slice and Dice Video! Watch A Pair Of Porsches And A GT350 Battle It Out A Road Atlanta At The Mitty

3 thoughts on “Watch a Fourth Gen Camaro Snap All 10 Wheel Studs and Lose Both Rear Wheels at the Strip!”