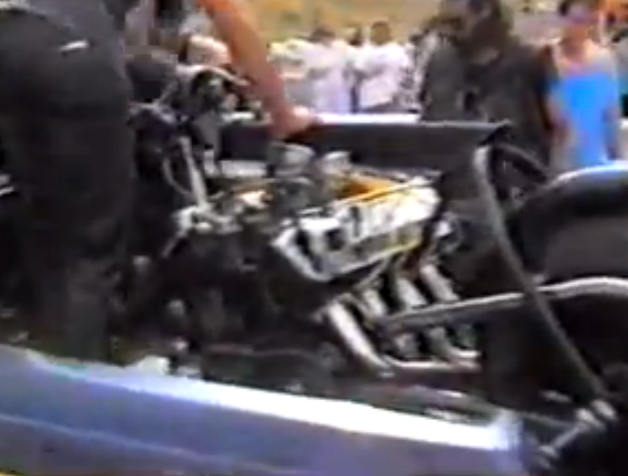 Well this is an interesting watch! The image you see above is the remains of a Cleveland Ford powered V8 drag bike being loaded into a truck. Filmed at what appears a 1991 gathering of the Hells Angels motorcycle enthusiasts organization in New Zealand, the video features a very nasty motorcycle wreck. The motorcycle in question is of course powered by a V8 engine. If this doesn’t give you more respect for EJ Potter’s decade plus of V8 motorcycle insanity, we’re not sure what will. The rider pops right up after the crash which is clearly a sign that the almighty has nothing against the Hells Angels. If he did, this guy would have been a goner.

Things go from bad to horrible for the rider just after he twists the throttle. The bike immediately moves to the right, which is bad because the guy is in the right lane. After working the throttle to prevent a crash with the wall, the motorcycle goes into one of the most epic tank slappers we have ever seen. The fact that the guy held on for as long as he did means that he would be a great rodeo prospect. The dismount pretty well kicked his ass though.

The carnage gets rolling about :40 into the video. You can fast forward or revel in the NZ Hells Angels  prior to that.

Press play and watch a dude in New Zealand go for the ride of his life!

Awesome Video: The Story of The Royal Bobcat Package As Told By Jim Wangers Drag Video: Watch This 1961 Dodge Powered By A Slant Six Take On A Mighty Hellcat At Mo-Kan Dragway