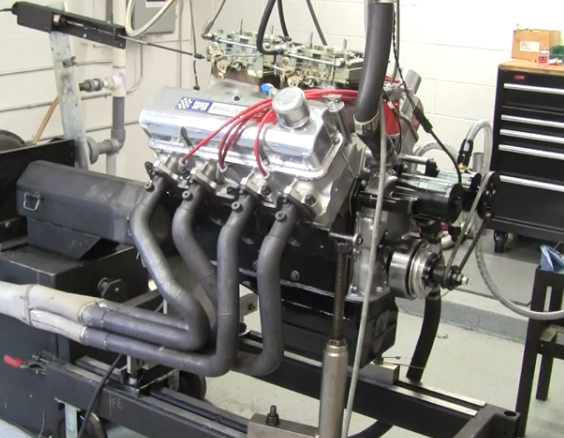 Barry Rabotnik’s name is no stranger to the pages of BangShift. He’s one of the best known engine building specialists for Ford’s vaunted FE family of engines in the country and this video shows one of his hairier creations. This is a 527ci stroker FE engine that has 13:1 compression, a big mechanical roller camshaft, and set of Blue Thunder high riser style heads. You can also see the two four barrel carbs perched atop of the mill. While the RPMs are not shown or specifically listed we’re saying that this engine pulls well past 7,000 in this video. Things get kind of dramatic when the engine reaches its upper vocal register and the vibrations are enough to nearly scramble the camera. That’s noise we can love for sure.

FEs are cool engines and it seems like they have been experiencing kind of a renaissance over the last several years. Cylinder head selection continues to improve, power levels keep rising, and aftermarket support for the well know big blocks has never been better. Some guys used to say that FE stood for Finally Extinct or F’n Expensive and while we’re not so sure that the second phrase is incorrect we’re positive that the first one is wrong. FEs aren’t going anywhere soon and frankly, if you see this one on a race track it’ll probably be heading by you in the other lane.

A mighty 427 is certainly an engine on our gearhead bucket list to own. Success in virtually every form of motorsports proved it out over the years and because the engines powered such beasts as Thunderbolts and the GT40s that won Le Mans, it has earned its rightful place in the pantheon of  legendary Detroit V8s. This one sings a very sweet tune that we know you’ll enjoy.

Watch This Aussie Valiant Explode A Transmission In As Grand A Fashion As You Will Ever See At The Drags This Awesome Video From The 1972 NHRA SuperNationals Highlights The Sport's First 5 and Jim Dunn's Rear Engine FC Win!