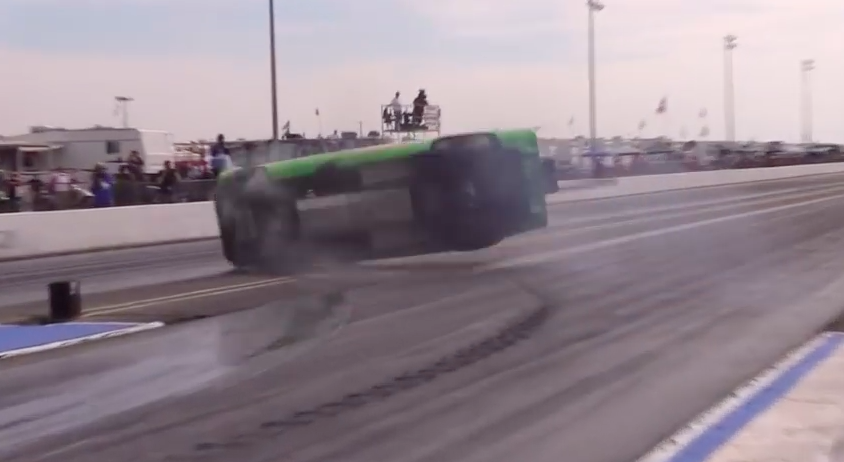 There were a few wild rides at the 2016 Good Vibrations March Meet at Famoso Raceway in Bakersfield, California but none was more front and center than Chris Morel’s barrel roll just past the Christmas tree. Running in the nitro funny car category, Morel launched off the starting line in his Little City ‘Cuda, Morel completed his burnout and staged the car with no issues. The second he stepped on the gas, a fluid line on the car (fuel or oil likely) let loose and began hosing liquid in front of his rear tires.

As you will see, one of the tires got into the juice and from that point forward that was nothing to do but hold on for Morel who went on a rough ride with the car flipping up on its side and then rolling onto the roof. With fire evident under the nose of the car, starting line safety people rushed to his aid with fire extinguishers and helped to get him out of the car which ended up on its roof.

Obviously the scariest part of this deal is the fact that with the car on its lid he ability of the driver to get out the escape hatch is removed. Thankfully these cars have the large, open side windows and that allowed Morel the ability to pop out of one and get away from the mess.

When a car with a spool gets fluid under one tire, it is a really bad situation and the best drivers in the world are reduced to passengers. We wish Morel and crew the best and hope they are able to get their beautiful ‘Cuda fixed and running again.

Les Mayhew shot tis video for CompetitionPlusTV from the starting line at Bakersfield. You can see Chad and his dad up there on the scaffolding. You can also see photographers scattering for their lives!

Dynatech Releases New Headers For Camaro, Corvette, Silverado - Big Power Gains To Be Had There's A Weird An Insanely Expensive Deuce For Sale - Twin Turbo Ferrari Power! That Stance Tho...