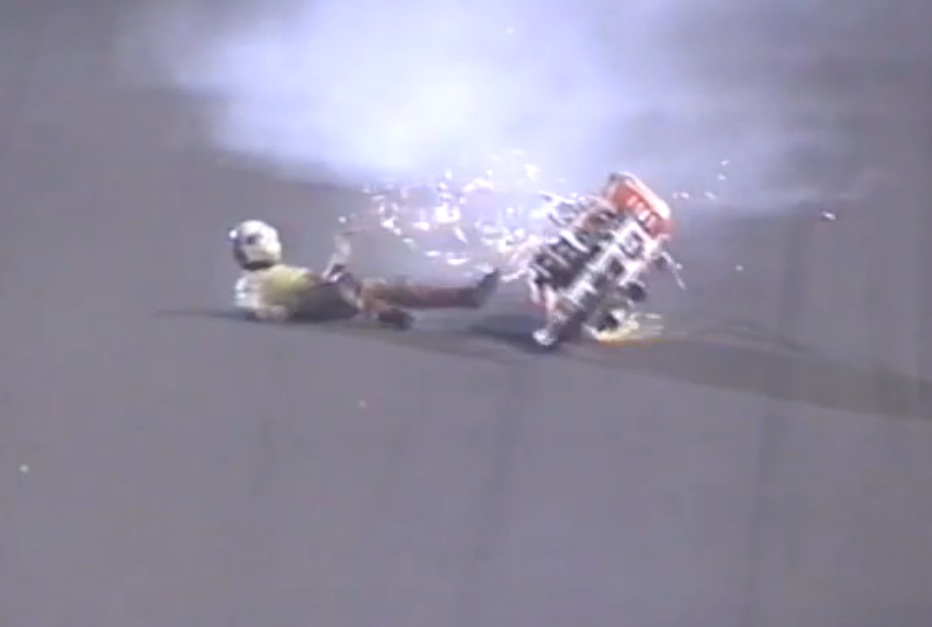 We’re going to coin a new phrase for what Australian drag race Phil Howard experienced on this run back in 1995. We’ll call it, “the agony of victory”. Seconds after ripping off the best lap of his career and winning the Australian Nationals, Howard found himself read to run up the backside of his competitor on the shut down area and then found himself skidding along on the asphalt as his motorcycle flipped and rolled on the other side of the course. Howard pops right up and walks away but that whole experience may have tempered the jubilation he was experiencing over winning one of the country’s biggest drag races.

Top fuel motorcycles are awesome beasts and this video is cool because you get some great close up footage of the nitro burning supercharged machines. The blower may look cute and the noise may be ear splitting but even back in the 1990s, these motorcycles were running in the six second range at way more than 200mph and they were as uncontrollable as they are now. A couple of the issues that riders of these bikes normally experience compounded on Howard and caused his spill at the end of the track.

The first thing that happened was a oscillation just as he crossed the finish line that slowed his ability to apply brake and get the thing decelerating. Once he got the oscillation handled, the giant rear tire chose to sent him across the track and despite leaning and adding steering to counter it, nothing happened. Soon he found himself directly behind his competitor and gaining on him. At that point Howard did the only thing he could have done and we’re virtually certain he know what was about to happen as he grabbed a handful of front brake.

Just like on your pedal bicycle, locking the front tire didn’t end well. The bike washed out and he actually hung onto it for an incredible amount of time before exiting stage right and letting the wayward bike slide and flip before it stopped, lading upright on the wheels. That’s showmanship! Howard was OK and hopefully he won enough cash to pay for the repairs.

One thought on “Watch The Crazy Top Fuel Motorcycle Final From The 1995 Australian Nationals – Big Numbers, Crashing Bikes, Everyone OK”