Dec 05, 2014Brian Lohnes1320 Videos, BangShift 1320Comments Off on Watch The Daddy Dave S10 Leave The Starting Line With Fire In The Pipes And The Wheels UP At Kennedale Raceway 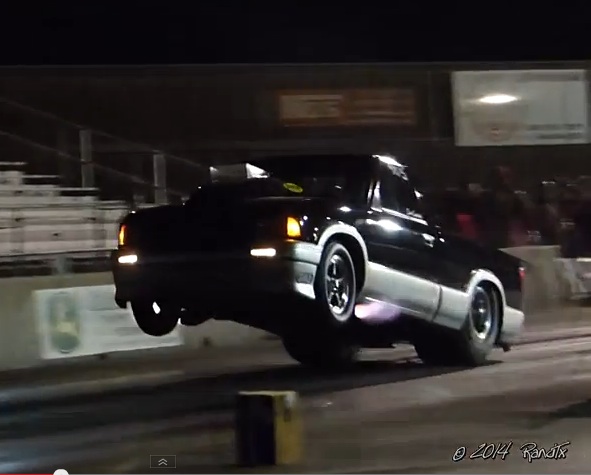 There are lots of wheelie videos out there on the internet. It is cool to see anything hike the front tires up in the air and leave the starting line like a scalded dog, but there is something to be said for a purely violent launch that includes instant lift off, fire out of the headers, and results in cones being mowed down in the middle of the track. Such is the case here with the Daddy Dave S10 from the show Street Outlaws leaving the line at a no-prep style race being held at Texas Raceway in Kennedale, Texas. This truck is a mean bastard and there’s just something even neater seeing it do its thing at night and really get after it on the hit.

Nitrous cars tend to hit the starting line pretty hard but on this pass the truck was loaded for absolute kill. It goes right up and pulls even harder with the front end climbing for the sky before heading to the middle of the track and moving down a bunch of cones. Lots of no prep videos have been popping up recently and we’re interested to know how quickly and widely that whole phenomenon is spreading. It seems like it is growing like wildfire with tracks from Colorado to Texas, and even the east coast running races where the only thing that’s done to the track is a quick pass over it with a broom to knock any rocks off. No dragging, no spraying, no crying, and no whining. There does seem to be a pretty high carnage rate but that’s the cost of doing business, right?

PRESS PLAY BELOW TO SEE DADDY DAVE LEAVE WITH FIRE IN THE PIPES AND THE WHEELS UP!

Roadside Find: This Big Ass Truck Looks Like One That The Guys At Big Ass Trux Would Build! Unhinged: There's A New Porsche, It Costs $500, And You're Still A Tool If You Spend The Money