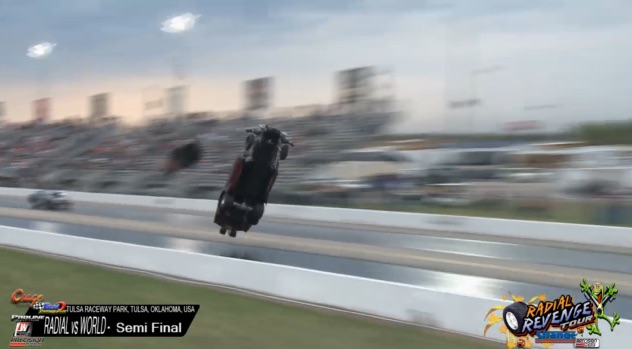 Less than one week after a magical return Andrew Alepa’s Corvette took flight at Tulsa Raceway Park with Daniel Pharris behind the wheel. At the 2017 Outlaw Street Car Reunion the car waded through a very tough field of Radial vs The World competitors to collect a $20,000 victory. It was the culmination of a thrash that started at South Georgia Motorsports Park. At that event, while testing the car Kevin Fiscus experienced a significant fire which damaged the front end of the machine.

Because Fiscus did an amazing job driving and did not crash the car, the crew was able to repair it in a lightning quick three weeks. With Pro Line power and tuning by Josh Ledford the car was amazingly good at Memphis and set a standard of performance no one else could match. At Tulsa, it went into a huge power wheelie and had enough speed that the air got under the car and lifted it into the air like a leaf.

Incredibly you will see the launch, the flight, and Daniel Pharris step out of the car immediately. He seems to be OK and fully intact. The car’s level of damage is significant we have to guess but we have not seen an official report. Pharris joins a club with members like Dwayne Mills, Marty Stinnett, Steve Jackson and a handful of others who have had Radial vs The World cars do this.

Thankfully the car had a straight trajectory and stayed between the walls. You will see the car lift off and rise until the nose flies off and then it loses the air cushion and comes crashing back down to Earth. The whole thing is pretty amazing, considering you are looking at about a ton and a half floating through the air like a model airplane.

Keith Haney was in the other lane in the Enigma Camaro and he too had issues early on in this pass. His car went into a massive wheelstand and slammed down but he did not have the speed or momentum that Pharris had so it was not a total liftoff situation.

New Angle And In-Car Video Of The Daniel Pharris Andrew Alepa Corvette Flight In Tulsa! Video: 50 Years of Firebird Raceway - An Amazing Look At One of Drag Racing's True Gems