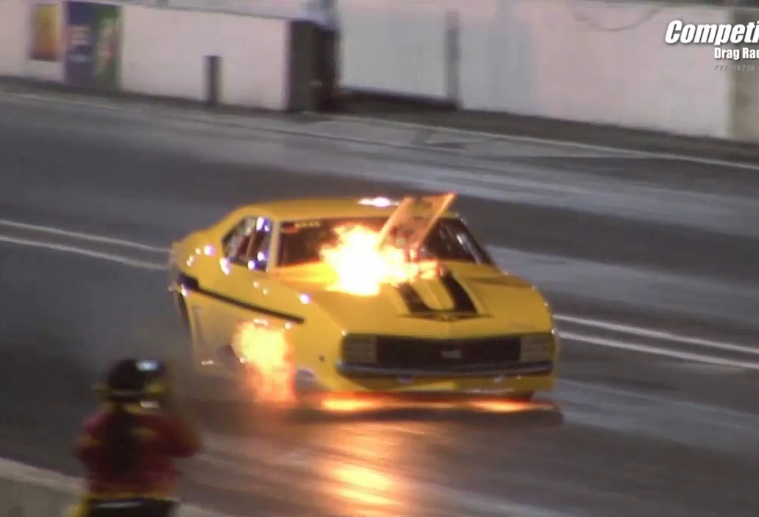 PDRA Pro Nitrous racer David Campbell went for a ride he will surely never forget last weekend at Rockingham Dragway in North Carolina. While making a qualifying attempt, Campbell’s Sonny Leonard mountain motor on nitrous powered Camaro suffered a huge manifold explosion that blew the scoop and pieces of the front end to the outer edges of the atmosphere before the Camaro had gotten to the sixty foot mark. If that wasn’t bad enough, the initial explosion touched off a fire that ended up consuming the entire front half off the car. Some of the creepiest video we have seen in a long time happens here when the car is slowly rolling down the track and the fire is growing and growing. We’re not sure if Campbell was unbuckling, going for the fire equipment, or simply trying to gather himself. Either way, it was hot and getting hotter.

CompetitionPlus put together the video below using some Roger Richards stills and the video from the live stream of the race provided by MotorManiaTV. The announcer is Al Tucci and you can clearly hear the frustration in his voice as he admonishes all the people on the starting line who could have been hurt by this incident. We guess the flaming car going down the track is self evident but he was really hot on getting those people out of there. Hell, they could have been blocking the safety trucks trying to leave their positions and get to Campbell to render aid. Being that this explosion was so close to the starting line, there must have been a BUNCH of people in danger. Potentially very bad deal.

Having seen my share of these types of incidents this year, I’ll only add that I’ve not seen one turn into a five alarm blaze like this one did. We feel for Campbell because that is an awesome car and there’s a long road ahead to get it back into racing condition. We hope to see it out again when he’s able to get the hot rod cleaned, inspected, and fixed up. Like any big horsepower engine, when things are going right it is poetry in motion and when they aren’t? Katie bar the door.