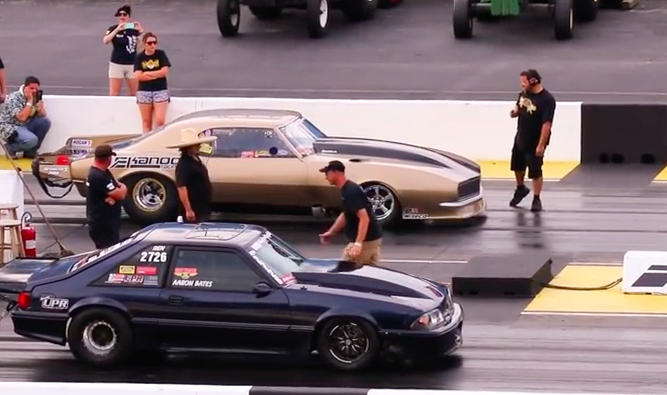 It took a couple of years but the NMCA finally scored a dramatic team victory over the NMRA at the 2016 Nitto NMRA/NMCA super bowl of street legal drag racing and the winning run is featured in the video below from the VictoryRedColorado YouTube channel. DeWayne Mills pulled off the stunning win with the hard charing Aaron Bates in the other lane and he did it by the slimmest of margins, his Mickey Thompson Radial Wars Camaro barely sticking a fender on the Mustang at the eighth mile finish line. But before we go there, we have to lay out the whole scene for you.

The NMRA has dominated competition at the Super Bowl for ages. The event had been run 11 times coming into this year and the NMRA had eight wins under their belt. Even tougher to swallow, the NMRA had won the last three years on the very last pass of the Super Bowl shootout. Things were looking bleak for the NMRA crew because they shot to an early lead and then gave it all back and then some. Losing six to four with three passes left to make, the only hope they had was to run the table. The best possible news is that they got into the meat of their order on those last three passes. Jacky McCarty took care of his business for NMCA, Kevin Fiscus won his matchup and with the score tied six to six, it was DeWayne Mills and Aaron Bates lined up for the marbles. NMRA faithful were confident that another win was theirs for the taking, NMCA racers knew that their hopes were pinned on a good candidate and you could literally feel the electricity at the place.

Because this was a shootout situation with no scales, no fuel check, and no actual rules, Mills bolted on a set of 102mm turbos and let it have all of ’em. As it turns out, that was the right move and the current NMCA Mickey Thompson Radial Wars points leader became the defacto hero on Sunday night, taking the win home for all of the long suffering NMCA racers out there. This was truly bad ass! The Golden Gorilla did what it was designed to do and by the slimmest of margins.

Watch this high-horsepower marine diesel absolutely grenade on the engine dyno No Times, No Prep, No Problem: Midnight Drags From Tulsa Raceway Park!