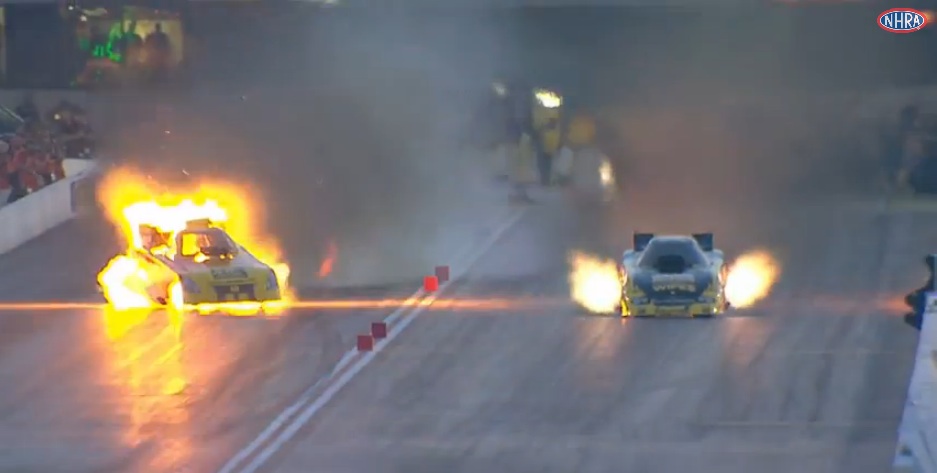 As a couple of you have probably noticed, my name was nowhere near the blog this past week. No, there wasn’t an ugly board of directors meeting where Chad and I fired each other, I took the week off and went away with my wife for our 10th wedding anniversary. Because of this trip, I also stepped off the NHRA announcing train for the week and have been following the results and news from Chicago from my smart phone while also clutching an umbrella drink. One guy who probably needed a drink after Friday night qualifying was funny car veteran Bob Bode who suffered a massive, flaming explosion during the evening qualifying session. The guy handled it like the driver that he is and barely clipped a cone while the car was completely engulfed in flaming fluids that had escaped the engine when it expired.

Bode is not a tour regular but he sure is a Chicago regular and he has been for many years. Dare I say that there is not a more shockingly awesome thing in motorsports than a funny car explosion. I don’t mean “awesome” in the YAYYY! sense, I mean “awesome” in the actual sense that the word is intended to be used. It take a second for everyone to compute what the hell just happened when a funny car explodes and that’s from both the announcing deck and the stands. Inside the car, there’s no time for anything but figuring out how to get the flaming hulk stopped and Bode showed his professionalism and talent in doing just that here.

I’m done with the umbrella drinks for a while, I suggest Bob get on the same program with respect to the blowing himself up act!

Watch Mike Ryan's First Post Wreck Interview From Pikes Peak 2014 - How Did The Truck End Up In The Woods? He'll Tell You Nitro Cars Test For Famoso's Saturday Night Nitro