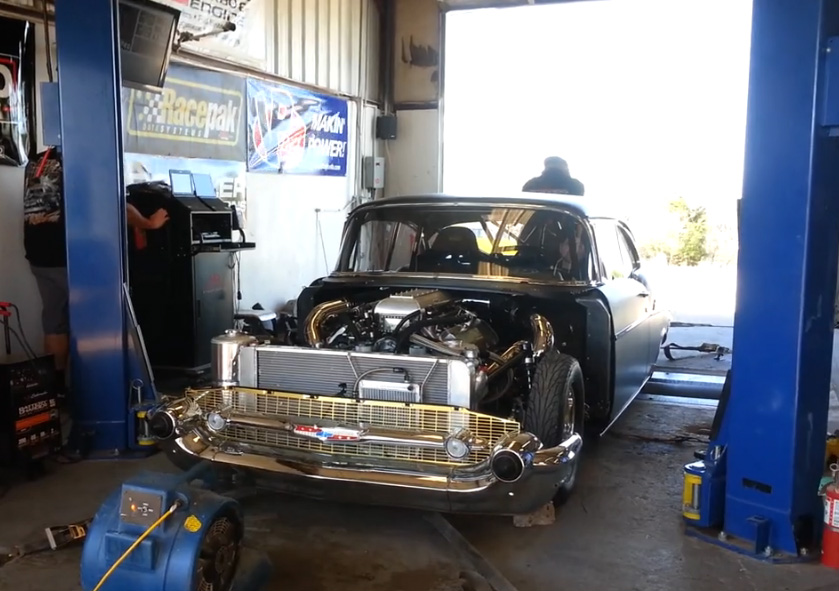 Let there be no question, Hot Rod Magazine Drag Week has officially entered into the “nuclear arms race” stage at this point in the game. In this video you will see the “Evil Twin” 1957 Chevy of Jeff Lutz making a dyno pull. During this pull, the big twin turbocharged engine in the car spins the rollers hard enough to record a reading of 2,140hp at the tires. This is right where Steve Morris showed Tom Bailey’s combo to be last winter during some dyno work videos he published at that point. Lutz’s car is a masterpiece which is hundreds of pounds lighter than his earlier machine with a more advanced chassis but the same classic 1957 Chevy looks and that awesome steel front bumper to boot.

Chad and I were both out on the first Drag Week in 2005 and no one was talking about having a 2,000hp car or trying to run six seconds or knowing that the new “standard” is being able to run a six second lap at every track on every day of the competition to have a shot to win. Nope, back then it was just praying you got to “tomorrow” with your junk intact. Over a span of about 10 years, this event has completely altered (forever) the perception of what “streetable” horsepower is. Obviously with modern technology, these beastly engines can have multiple “tunes” available for street or racing duty but that’s beside the point when you think about fuel systems, ignition systems, valvetrain, and other components that need to live through the trip for their users to be eligible to win at the end. 10 years ago if someone was telling you that they could run a six second lap in a street legal car and their name was not Saboury or Jensen, they were blowing smoke up your keister. Now we’re not saying that they are on every street corner but there are exponentially more six second “street cars” in the world than there was in 2005 and Drag Week is the reason.

All that said, watch this hellacious beast of a car try to spin the dyno rollers right out of the floor!

Post by LUTZ RACE CARS.
Here's A Collection Of The Coolest Trucks We Saw At Goodguys Del Mar 2014 Out With Their Boots On: Ford Announces Final Falcon GT For Australian Market - We Lament It