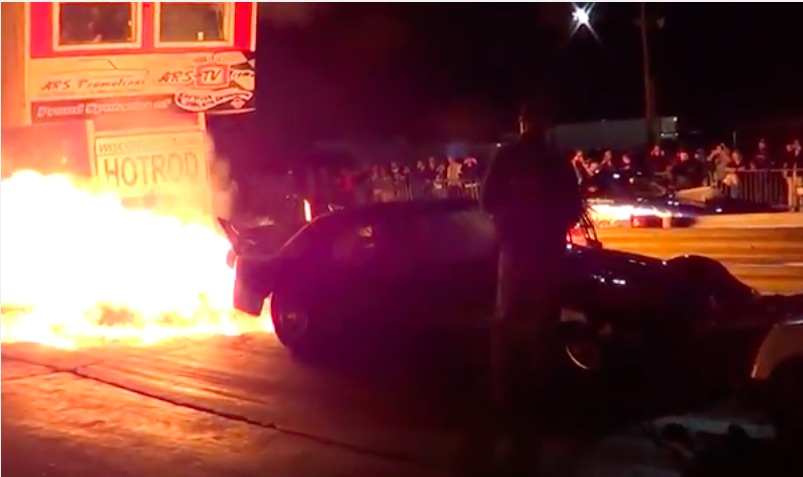 If you have spent any time at the drags you have likely watched a jet dragster or a jet funny car make a run. There’s smoke, there’s fire, there’s that familiar shrill scream as the afterburner lights and the car swooshes down the track. These cars have put more butts into more seats at tracks since 1960 than literally anything else ever created. 99 times out of 100 things go according to plan. This is not one of those times. Jet Car racer Brian Mitchell and his machine star in this video and the did not put on the show they were expecting.

What you are going to see is a fan video made directly next to the track. Pay close attention right around the 1:00 mark as the crew plugs the car in and starts to spin the engine up. Immediately upon doing that you will see fuel begin to pour from the back of it like a fire hose. You can do the math on what happens next here.

The engine lights and the next thing you know there is a lake of fire behind the car. The crew person closest to the camera does not seem to comprehend what is happening but another guy rushes to the driver’s side window of the car and seems to be talking Mitchell out of the fun car.

Amazingly Mitchell gets out of the car grabs the water box hose and begins trying to extinguish the blaze behind his car! Shortly thereafter the fire extinguishers get the problem solved in a hurry. Because jets are supposed to make fire, we’re thinking that people assumed this was all part of the act. It was not. Thankfully the fire did not move forward and Mitchell did not find himself in the same predicament as Bob Motz did a few years back in his big jet truck.

You never know what is going to happen in drag racing and this is further proof.