The Earthmovers: This 1944 Film Celebrating The Seabees In WWII Is Absolutely Awesome 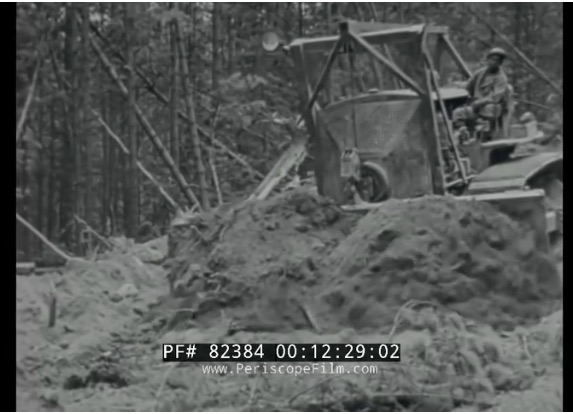 “Some guys want a Jeep after the war…brother, give me a bulldozer!” This is one of about 100 great lines in this 1944 war department film called “The Earthmovers” which celebrate the accomplishments, hard work, creativity, and incredible efficiency of the Seabees during various campaigns of WWII. The other thing it celebrates is the hard work and great equipment being produced on the American home front. There’s other great lines about sea power, air power, fire power, and WORK POWER which is what this whole film celebrates.

The highlights include footage of ports being reopened, beached being breached, airfields being constructed, bridges being built, and even a few seconds of video featuring a runway being handbuilt by Chinese workers in a fashion that seems to actual predate the existence of the airplane.

There’s a great clip of a mobile service unit where a machinist is using a lathe to take some material off of a shaft of some type.

We love this video because it celebrates not only the mechanical stuff that the Seabees were sing but also it celebrates something that is too often lost in WWII history. That’s the fact that it was work that underpinned the Allies successful efforts to defeat the Axis. Sounds dumb to say but without the work ethic of the generation. Without the idea of quality, pride, and function, the war would have been lost.

“You can just about anything with a bulldozer other than shave,” another gem from the film that every history loving gearhead is sure to enjoy.

Press play below to see this killer 1944 film celebrating the Seabees!

Battle! Watch A Log Skidder and A Bulldozer Have A Push-Off In The Wild! Muscle Car And Corvette Nationals Photos: Nothing But Barn Finds And Survivor Cars!