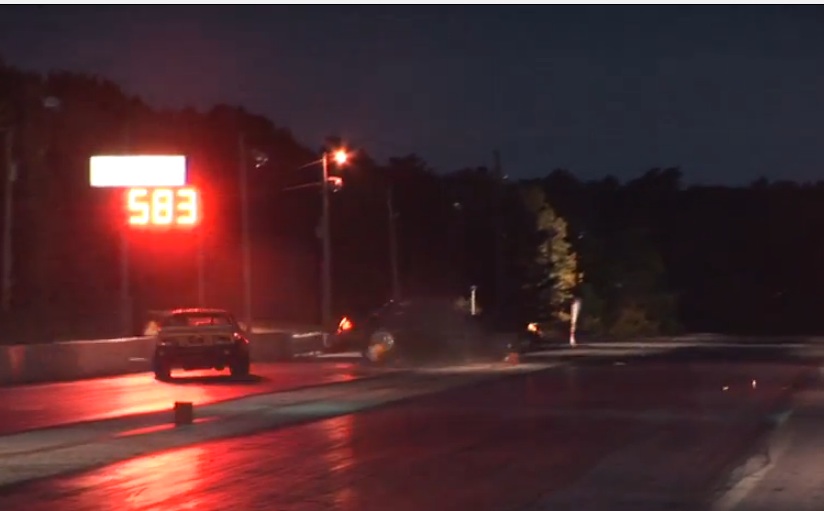 Urban Hillbilly Action Videos have really made a killer comeback this year and we’re thankful that they have. The guys who pioneered the types of video we see on the web commonly today still have an edge and the ability to be in the right place at the right time to capture crazy, scary, and downright wild video like the clip that you will see below. Shot at the eighth mile Ozark Raceway Park in Missouri, we see a turbocharged Mustang with a pretty small slick on the back line up next to what looks to be a doorstop shaped Triumph TR-8 which has obviously been modified for the drags.

The Mustang is far faster than the Triumph and we learn that on the hit of the throttle. Things are going OK until something upsets the Mustang shortly down course. The car flies out of control despite the best efforts of the driver and slides across the track, wiping out timing blocks and worse than that, ending up in the lane in front of the Triumph. For a second it appears that disaster will be averted but the guy in the Triumph could not get the car out of the way of the Mustang after it slammed into the wall and began pinwheeling down the shutdown area of the track. The little English car got a pretty good bash and you’ll see it acting like an unguided missile at the top end as well.

Both drivers walked away and will be fine but the same cannot be said for their cars. Lots of damage done to both but it at least appears that the roll bar kept the guys in the vehicles safe. Small tire drag cars, especially those with turbos that make prodigious horsepower are highly entertaining to watch for the reasons that you’ll see in these videos. Obviously we prefer when the drivers save the cars and don’t wreck them, but you never really know what’s going to happen next with cars like the Mustang. That’s what sells tickets. Urban Hillbilly Action Video rules. Visit them here!

PRESS PLAY BELOW TO SEE A BAD WRECK THAT REALLY COULD HAVE BEEN MUCH WORSE – TURBO MUSTANG AND A TRIUMPH?!

Forgotten Concept: 1970 AMC AMX/3 The 2014 Rally At The Ridge: Not Your Average Car Show With Neat Cars and Beautiful Scenery