Apr 29, 2016Brian Lohnes1320 Drag News, 1320 Videos, BangShift 1320Comments Off on Watch NHRA Racer Sidnei Frigo Suffer A Massive Crash In Houston – He is Banged Up But OK According To Officials 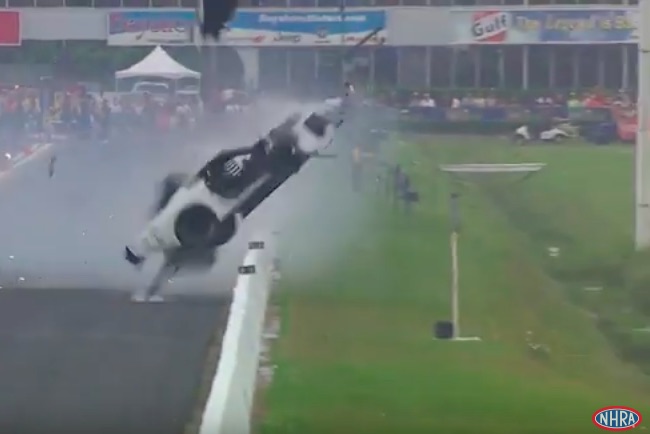 During an insane pro mod qualifying session in Houston that featured multiple rear tire explosions, the most heart-stopping moment came when NHRA Pro Mod (and occasional top fuel) racer Sidnei Frigo suffered a titanic wreck that saw his car mash the wall, leave the ground, and end up tumbling through the mucky grass before coming to a stop. Figo left the track in a helicopter as a precaution but NHRA officials have said that he was communicating with the medical people and the trip to the hospital was purely as an extra measure of safety. When you see the wreck you’ll understand why they wanted to take every necessary step because this was a bad one.

In the video you will see the two cars leave the starting line and you will head Mike English on the call. Neither car is off to a great start and both are moving around the track. Because of the predicted weather this weekend in Houston, the need for guys to get in the show in the first or second qualifier is huge. There are 30+ cars trying to hammer into a 16-car field and missing the first or second Friday session could really be a problem if it rains for days on end. Frigo had the better of the two runs going but his car kept heading toward the center line. You will see it make a quick move to the center and clean out the blocks. This is where the badness begins.

With a terminal speed somewhere around 250, Frigo’s car needs the integrity and the shape of the Corvette body to get him down the track. When the block punctures the body, basically right through the headlight area, things get bad. The car comes across his lane, wails the wall and begins a series of rolls and flips that are just ugly.

In an ironic twist, the fact that it jumped the wall and got into the softened Earth that is basically like a big cushion ma have helped Frigo. It was like flipping on a sponge over there. Watch the video and then scroll down for the second video. That one features the Jonathan Gray rear tire explosion and wall mash from earlier in the day. Rickie Smith also had a tire go down after making a 5.77 pass apparently. Crazy night!

Strange Bird: Check Out This Super Rare John Fitch Firebird We Found On Ebay! Awesome Old Mopar! This 1974 Duster Drag Car Has Been Sitting For Decades And Is Near Mint!