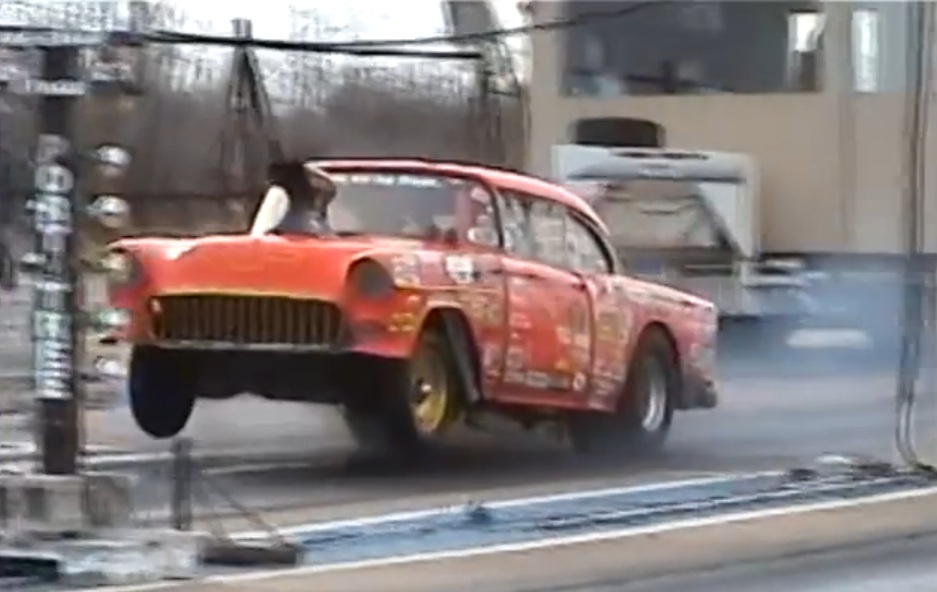 Sometimes in the flash and dash of the modern drag racing world we lose sight of where this sport came from and we also forget that the majority of strips across the country are not huge palatial places like we see on television. Nope, most of the tracks across the USA are more humble operations that provide a place for guys and girls to bring their hot rods out and have some fun. Speedy’s Newport Dragway in Arkansas is one of those places and this video shows a truly cool 1955 Chevy clawing at the asphalt on the way to a quick charge while the driver makes lightning quick gear changes. This is old school, rev it up and rip gears kind of racing. This is the stuff that really makes us smile.

We’re calling the car old school not because it has a stick in it but for several reasons. For starters there is the wheel and tire combo, the stance, the big radiused rear wheel openings and the tall snorkel style scoop. On the inside of the car you can see the down bars from the roll cage and they are in pretty far from the body of the car, again pointing to the fact that this thing has been a racer for a long, long time. Today’s chassis guys pride themselves on tucking the tubes so tight you can barely see them. Back in the day it was not the practice to do that and you can see where the thing is through the windshield of the car.

Judging by the RPMs that the driver leaves at this is a little small block car and like old school modified production machines from back in the day, we’re guessing it has some sort of ungodly heavy flywheel on it. That heavy flywheel would help the car get off the starting line with all of its stored energy when the clutch was dumped. Lastly it sounds all the world that our man is running a true H-pattern shifter here and getting it done the old fashioned way. This is no “pro stock” style transmission as you can hear the motor wing up as the dude fans the clutch with his right foot on the floor and the shift handle moves from gear to gear.

This is raw, cool, and old school drag racing boiled down to its base elements. Think of this as a bit of a palette cleanse if you are getting tired of all the big time stuff. We love it.

UPDATE: I just got a call from a guy who knows stuff and was informed that the car is owned and operated by Bill Smith. It has looked the same since the middle 1970s and has always run small block Chevy engines. Stanley Stickler, the poster of the video believes the engine to be somewhere around 330ci and the engine has (according to him) a flywheel that weighs some 90+ lbs on the back of it! The car is well known in that part of the country and we’re sure glad that we stumbled upon the video of Smith doing the four speed boogie because it is a spectacularly neat shoebox.

Best of 2020: The Ultimate Overshoot Accident At Rallye Coeur de France Best of 2020: Street Car Takeover Bowling Green: For A Moment, All Was Right With The World