The Good Old Days: This Review Of The 1989 Chevy K5 Blazer Is A Reminder Of How Much We Dig Those Trucks 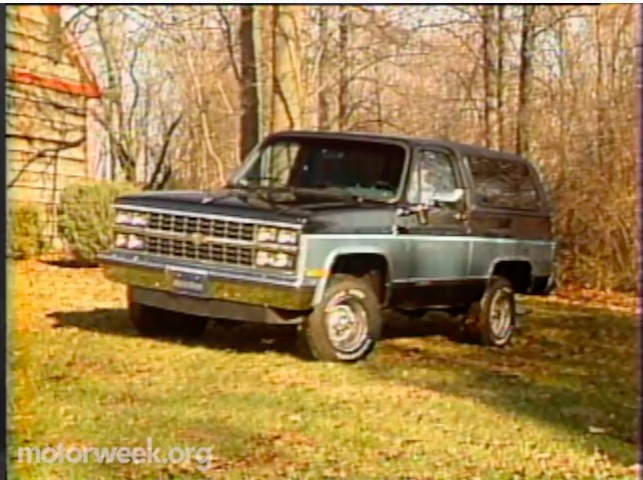 As a kid, I unsuccessfully lobbied my parents to buy a Blazer a few times in the 1980s and 1990s. I loved these things then, and I love them now. My friend and gas station co-buffoon Brian had a 1978 K5 Blazer that we successfully made run worse than new over the course of time. Ahh, high school. Anyway, this video served as a reminder to me about how much I really liked these trucks.

I cannot say that I am the biggest fan of the “four headlight” nose of the 1989-1991 trucks but I can look past that. Proportionally, things do not get much better for a truck. It’s big, it is square, its a nice short wheelbase, and the whole design is as simple as the day is long. Mechanically, you had a 210hp rated 350 with throttle body injection hooked to a 700R4 automatic. As you will see in this video, the stock performance of these things was not all that bad, actually the numbers kind of surprised us.

The deep rally wheels on this truck make it for me. I had these wheels on a pickup truck and they’re about the best looking GM truck wheel ever. Again, simple, easy, and classic. It’s interesting that these guys reference the rust problems these trucks had and how GM was trying to fix it by using galvanized steel, or at least more of it. Like the 1973-87 pickups, Blazers did tend to evaporate in climates that were not Arizona, Texas, California, or New Mexico. Around the Northeast, there was a period in the early 2000s where it became a rarity to see one of these things that had rocker panels that still existed!

Like all things square body GM truck, values of these rigs are skyrocketing. If you bought a clean one a few years ago you made the right move because it’s worth way more now and will likely not be reversing course any time soon. Why? Because now all the guys like me that wanted one as a kid are hunting them down.

Story Behind The Story: This 1964 Film Takes Us Behind The Curtain For The Introduction Of The New Mustang Watch The Money Pit Unlimited Modified Tractor Make Glorious Noises With Three Allison V12 Engines