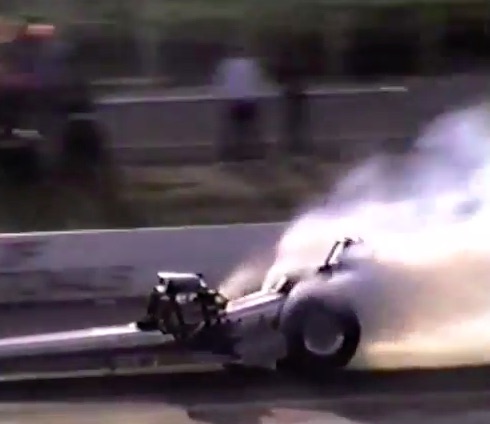 There’s only one first. Because of the fact it has been 20-something years since this happened and because of the fact that Bret Kepner was on the mic and he shares some of the inside information from that day below. It is always cool when a performance barrier gets broken in drag racing, especially one like this that has some real significance and really was something that sat dormant for many years. Before the whole “nostalgia drag racing” thing got cranked up in the 1990s, no one was out there running around looking for a 5-second time slip from a front engine dragster. Once the cars started appearing and gaining popularity, performances ramped up and things got ever more serious. Today, there are teams out there that can be considered legitimately professional running in the nostalgia ranked. When this was done, it was not to that level…yet.

Romine raced with the legendary Clayton Harris for years. Harris was the crew chief (we believe) on this car and then on Romine’s IHRA top fuel efforts which netted them three national championships. When you think about a nostalgia top fuel dragster today you think about all kinds of zooty modern stuff and the trickle down parts from big named top fuel and funny car teams that keep the nostalgia movement going. Well when this run was made, the engine was a 417ci hemi based off of a Donovan block and the thing had steel cylinder heads on it. You’ll hear Kepner go bat-dookie when the board lights up because this was a pretty titanic moment for slingshot dragster history. It was not just Romine chasing it, in fact the guys out in California where the majority of the cars were (and still are) located were rightfully cheesed off! It was at their next race, about two weeks after Romine’s blast at US 41 Dragway in Indiana that Gary Ritter went a 5.98 to illustrate that the California cars could get there as well.

We hit up Bret Kepner who was announcing (as mentioned) to give us his thoughts on the day and he told us that Romine and company were there on kind of a whim. They heard that there was a big match race style event and basically showed up. They were the only front motor top fuel car on the property and Kepner thinks that this was the lone pass they actually made that day. Bret told us that prior to this the team had made some runs in the 6.0 range and that the race for the 5-second pass was hot and heavy although it was largely a west coast thing and Romine’s car was basically the only real hardcore front motor nitro dragster in the central part of the country. He said that there were many tire smoking exhibition but for competition, Romine was the guy.

What's Worse Than Turning Your Pulling Tractor Over? Turning It Over And Blowing Up All The Engines The Big Little: This Compilation Of Miniature V-Twin Engines Of Different Shape and Size Running Is Awesome