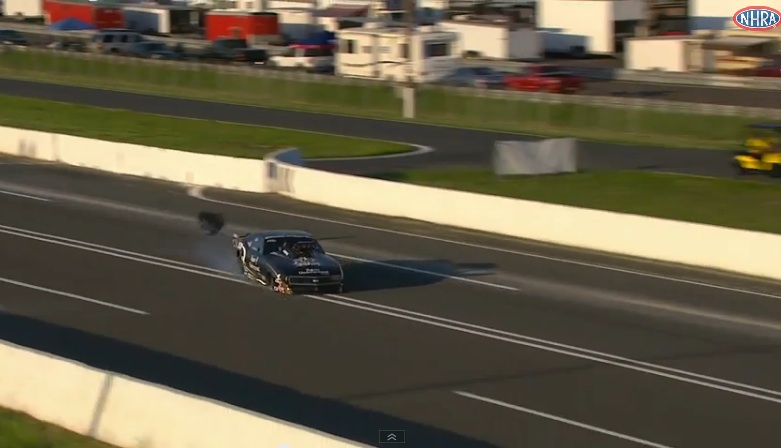 There are few things more hairy than seeing a very fast drag race car head through the timing traps and then not seeing the parachutes blossom. While some tracks are longer than others, you know that the guy or girl in the car is working as hard as they can to get their machine stopped before entering the sand trap, hitting something, or suffering some other type of carnage. Steve Matusek was faced with such a situation at the Toyota NHRA Summernationals in Englishtown this weekend when he completed a five second run in his Aeromotive/Agave Underground Tequila sponsored blown Camaro pro mod. When Matusek pulled the parachute handle the ‘chutes got wadded up and did not blossom like they should have.

Faced with the knowledge that E-Town is one of the shorter tracks on the tour, Steve immediately got working the brakes and whatever else he could do to get the car stopped before incurring any damage. This is easier said than done because a pro mod isn’t a Ferrari or even a family sedan when in a “panic braking” situation. Steve had to keep the car from spinning a couple of times in the shutdown area, all the while the trap was looming larger and larger. At the last minute he was able to pitch the car sideways and spin it into the trap Dukes of Hazzard style.

I have always maintained that the best drag racing drivers show themselves when the going gets weird and things certainly got weird for Steve in this clip. He handled it like a flippin’ boss.