Watch Terry Barkley Suffer An Insane Wreck At SCSN Anarchy Under The Arch In St Louis – He Walked Away! 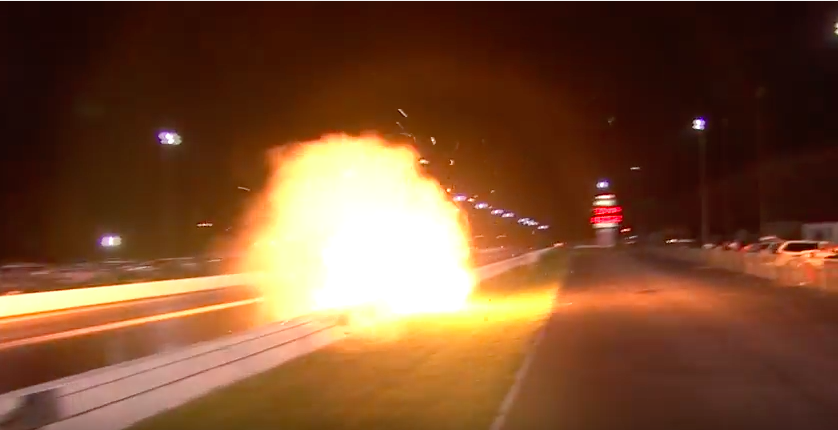 There are certain awesome things about a brand new, top level drag car but some of them are far less obvious than others. For starters there’s all the new technology, the big horsepower engine that is built to the hilt, the cutting edge suspension engineering, and the pretty paint/wrap. The stuff that is hiding in plain sight is the safety element of the car. Brand new race cars represent not only the vanguard in accelerative performance but the bleeding edge in safety technology as well and that is why a guy like Terry Barkley can walk away from one of the nastiest door slammer wrecks we have seen in a long, long time. Barley’s car was very, very new and it is too bad that this happened to him. That being said, we are more than relieved that he walked away sort but intact.

Bryan McTaggart was running the camera on our BangShift live stream of the event and he saw this one happen live. Bryan hit me up right after it happened checking on what we do for protocol in a situation like this and he said it was a big, flaming mess. While Bryan was positioned across the track from the crash, Urban Hillbilly Video’s Sean Melton was filming from the side of the track where the monster wreck happened and he caught a stunning account of Terry Barkley crossing the track, nearly clipping Eddie Rodgers and then piling headfirst into the wall with the car up on its side. He missed Rodgers by literal inches. Chilling stuff.

This is the type of monster crash that we would not even want to think about happening 15-20 years ago. The outcome would have been far more grim back in those days but with the advancements in chassis specs and construction drivers are in far better hands today. Incredible stuff.

Press play below to see the Terry Barkley Wreck from SCSN St. Louis – HE IS OK

4 thoughts on “Watch Terry Barkley Suffer An Insane Wreck At SCSN Anarchy Under The Arch In St Louis – He Walked Away!”