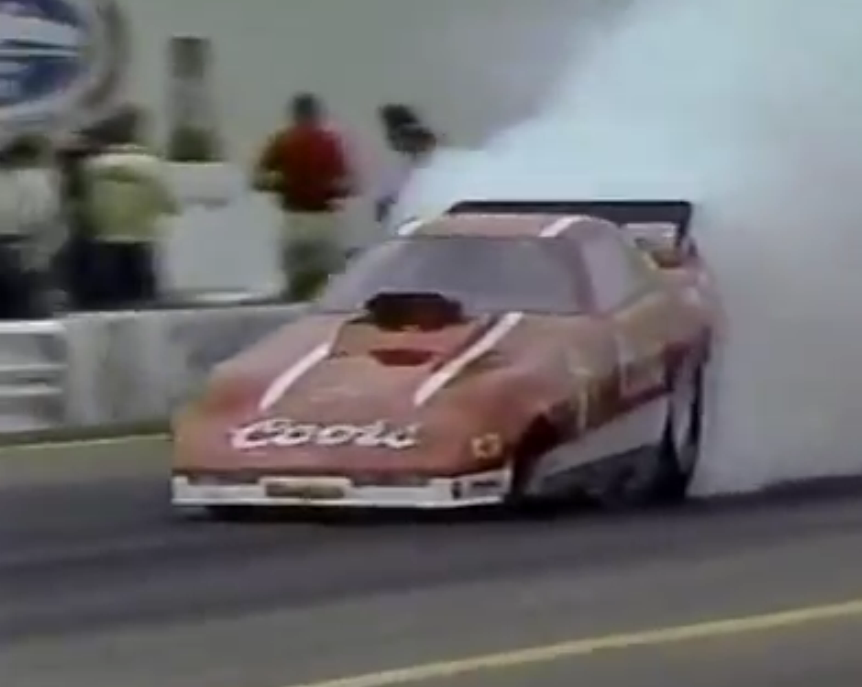 In working on all of my stuff for the upcoming Chevrolet Performance US Nationals, I came upon this video from 1985 that features nothing but the action from the Big Bud Shootout. Since the Traxxas Shootout will be held next weekend and follows the same eight car format for the money that the old Big Bud Shootout did, we can look at them both through the same prism.  The race within a race concept is still very popular with fans and it is cool that there is bonus cash on the line. In 1985 that bonus cash was $30,000. In 2015 it is $100,000. In the case of the 1985 Big Bud Shootout guys like McEwen, Bernstein, McCulloch, Force, and Pulde along with a host of others went after it hammer down on Indy weekend.

We love a couple of specific things about this video. The first is the fact that John Force is referenced as being kind of an older grizzled guy in this video and it is also mentioned that he had not won his first race yet by this point. That win would still be a while coming but the fact that he qualified well enough to be the #5 seed in this deal meant that he was getting down the track with regularity and had evolved to funny guy that was always on fire to someone that the big teams viewed as a  threat.

The bodies on these cars range from weird in the case of Dale Pulde’s car (weird but awesome in that case) to just plain weird in the case of some of the others. Rolan Leong’s Hawaiian would not win a beauty contest, that is for sure. Getting air into the engine seems to have been job number one for these guys. Check out all the weird aero stuff they have on these cars to get them to breathe.

Lastly, this video is cool because it definitely catches the class at the beginning of a transformation that would move it to where it is today. Bernstein and Armstrong had everyone’s number at this point and they would continue on that front for some time. Their advancements in data logging and other mechanical areas started to push these cars to places no one thought that they could go. Guys like McEwen and Pulde were nearing the end of their full time racing careers and the whole scene was ramping up hard.

The sound and the dry hops are worth the price of admission alone!

PRESS PLAY BELOW TO SEE THE 1985 BIG BUD SHOOTOUT –

Quick Gallery: Some Of The Local Flavor At The JDRF Crusin' For A Cure In Bowling Green, Kentucky Meet The HMMWV's New Replacement: The Oshkosh L-ATV