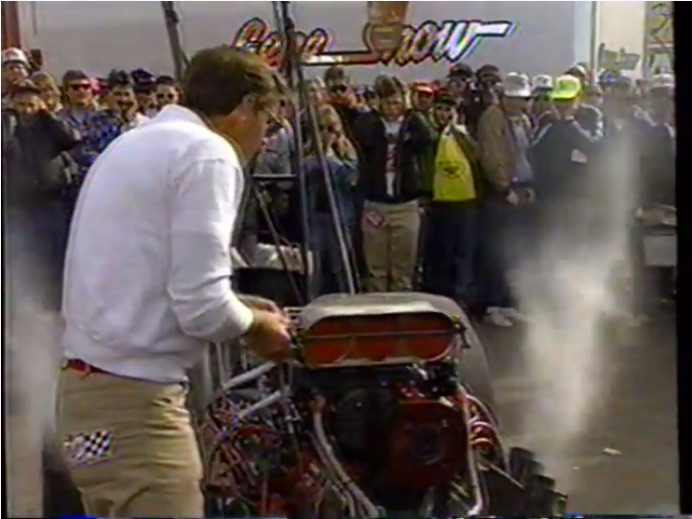 This year, I’ll be looking back at the 1990 NHRA drag racing season as the 2020 NHRA drag racing season winds its way around the country. The 1990 NHRA Winternationals was an interesting affair for a million different reasons. For starters, guys like Don Prudhomme and Kenny Bernstein transitioned to top fuel (Prudhomme had suffered a blow over in testing at Bakersfield), the race was delayed a week by rain, and adding to the story were new rules instituted by the NHRA.

Nitro racing teams were now mandated to use a 3.20 rear gear ratio. This was done to take some speed away from the cars, which it did at first but as are chiefs learned how to make the cars with with the gear, they got faster and faster. The other major rule was the banishment of electronic control systems for any function of the car. This was brought to bear because in  1989 some teams were starting to use electronic clutch management and the NHRA didn’t like it. So 1990 was the first year where the pneumatic clutch control systems were put into play for everyone and as we’ll learn during this race, some people were far more familiar with it than other. Guys like Ed McCulloch had started with the air system in 1989 so they were progressing nicely and we’ll see that through the races this season.

In the funny car world a young guy named KC Spurlock showed up at this race as a relative unknown and set the world on its ear with his performance. A guy from a sprint car racing family, he was a natural funny car driver and the team he put together was talented as well.

This is a fun watch and a look back at how things started off during the 1990 season!

Press play below to see the 1990 NHRA Winternationals, the kickoff to the season!

Diesel Tech Video: How Much Power Is There In A Cylinder Head and Camshaft Swap On A Classic 12-Valve? Big And Bad: 1971 Ford Mustang - A Real Boss 351 That Got Promoted To 429!