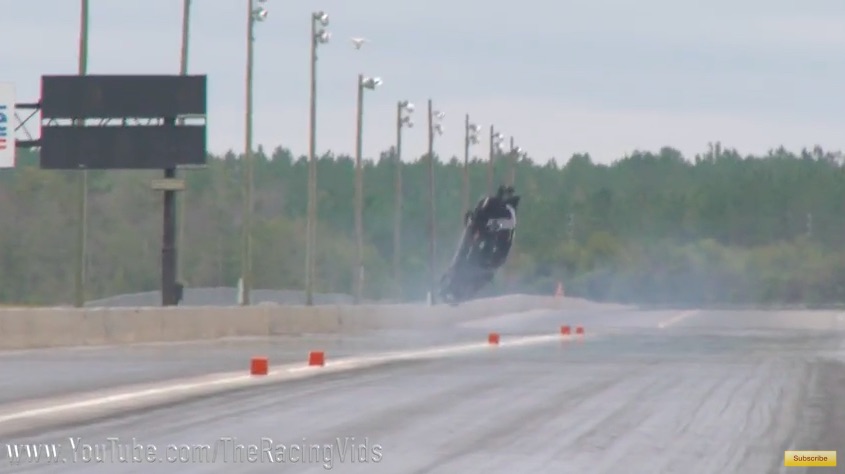 On Wednesday, I’m going to catch a ride down to Valdosta, Georgia for No Mercy 8, the massive and insanely fast radial tire race that has been packing the fans into South Georgia Motorsports Park for years now. The crowds are big, the car counts are big, and the records get blown up every year. There’s also a fair amount of complete insanity. That’s exactly what happened last year.

Marty Stinnett walked away from a calamitous wreck at No Mercy 7 in  2016 and when you see the video below of said accident you won’t believe that he was OK. After making a stout run down the track in his Mustang and stopping the clocks in 3.88 seconds at a speed of 188mph disaster struck. The car unexpectedly turned left, got into the wind, took flight, and then pulled a near complete flip in the air before smashing back to Earth. There’s no indication that Stinnett mashed the brakes or did something to bring this on. The incident has all the hallmarks of a mechanical failure of some sort whether it was in the rear end or in the front suspension.

It is nearly a given that at least once a year someone is going to fly a car at SGMP. It does not speak to anything but the insane levels of competition that this event brings out. You either show up with the house and push your chips to the center of the able or you get your ass kicked so hard you’ll never come back.

Today’s modern safety standards kept Marty Stinnett safe and sound inside a car that was doing things that he (no anyone else) could have imagined that it would do. It stinks that Marty Stinnett mangled a car but it is beyond amazing that he’ll be walking around and talking about it in the coming days.

Road Racing Coverage: Michelin GT Challenge Series Action From Virginia International Raceway How Would You Build It? This 1978 Ford LTD II Was Stored Away For Twenty Years...What Would You Do?