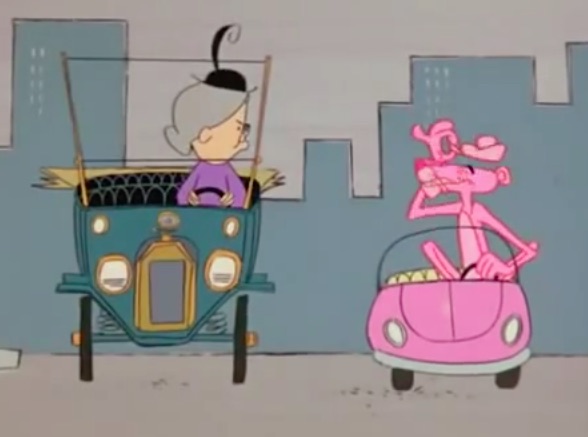 You know that we’re not huge street racing advocates around here but in the realm of the cartoon world? We’ve got no issues with that, especially when it involved the iconically cool Pink Panther and a sleeper. In this cartoon short from the 1960s called Pink Pistons, our ol’ pal the Panther heads to a used car lot and buys himself a little sports car. There’s some funny interaction between he and the car, especially when transforming its hue to Panther Pink. After setting out on a drive he runs into a couple of real characters on the street and the car kind of grows a mind of its own.

We dig the depiction of hot rods from the period in this short as well as the sleeper that the old lady is driving. It is a theme that is still as entertaining today as it was nearly 50 years ago now. Cars, speed, and comedy seem to go hand in hand.

I was trying to come up with something cooler to represent the Panthers football fans on Super Bowl Sunday but the reality is that there’s not much out there in he automotive world called Panther (that is worth a crap). We know the early codename of the first generation Camaro was Panther but after that? Kit cars and terrible things. This is better. The Broncos fans got their time and now this is yours…kind of.

Press play below to see the Pink Panther meet his match in Pink Pistons, a short –