Aug 31, 2015Brian Lohnes1320 Videos, BangShift 1320Comments Off on Watch The Quickest And Fastest Side By Side NMCA Pro Mod Pass In History – Razor Tight And Crazy Quick 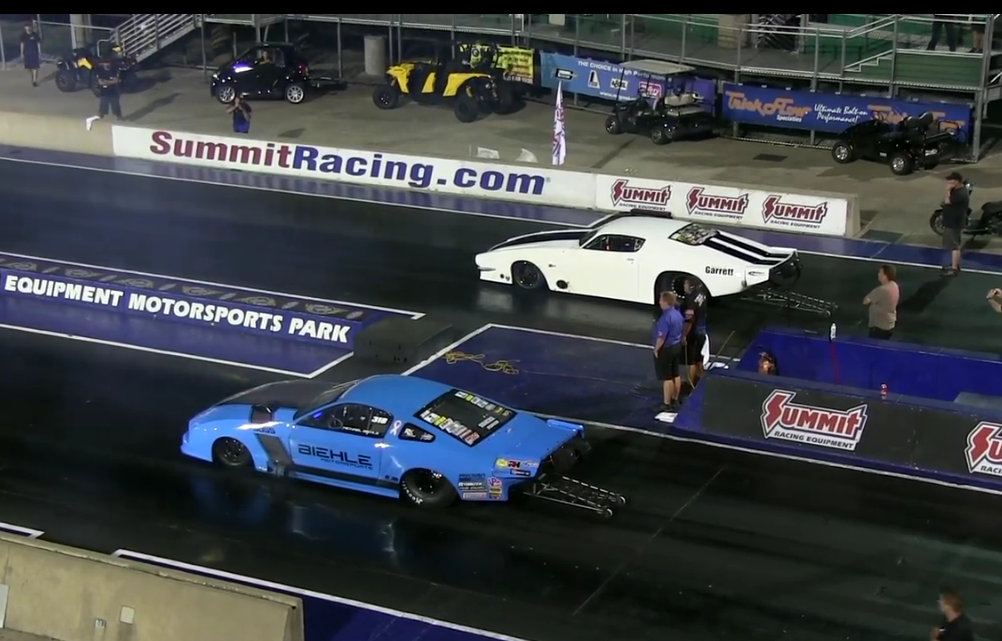 The final of Pro Mod at the NMCA World Street Finals played out exactly as it “should” have. The two quickest qualified cars waded their way through the field and met for the last blast of the 2015 NMCA season. Those two guys were Mike Biehle and Steve Summers in their turbocharged Mustang and Camaro respectively. Summers was the marginally quicker car over the course of the weekend but both guys were loving the high 5.80s and they each had a handle on the track. When we saw them come around the corner we knew one thing. This was not going to be about going down in the high 5.80s because it was late, cool, the track had teeth, and these guys are not people afraid to spare the rod when it comes to a potential race win. Mike Biehle had already locked up the season title and Summers was coming off a race win in Chicago last month so it was truly a “pick ’em” situation.

The show we got lived up to the hype it was given and the result was the quickest and fastest side by side pro mod pass in NMCA history. The two cars come off the line like they are shot by a cannon and being turbo machines, they back half the track in such a blinding fashion it nearly defies description. Who won? Your job is to press play below and watch one of the most beautifully brutal pro mod finals anywhere. We’re reasonably sure that this falls in the top 10 of quickest and fastest pro mod finals ever. We’ll check on that and get back to you. Mike Biehle is heading to Indy as you read this for the US Nationals. If he can run like this up there he’s got a shot at really making some noise.

ACED: AutoCross Every Day! You Think Your Car Is Fast On The Autocross? Watch This! This Volvo Is One Nasty, Violent Being...And Is So Bad We Can't Say It's Nickname!