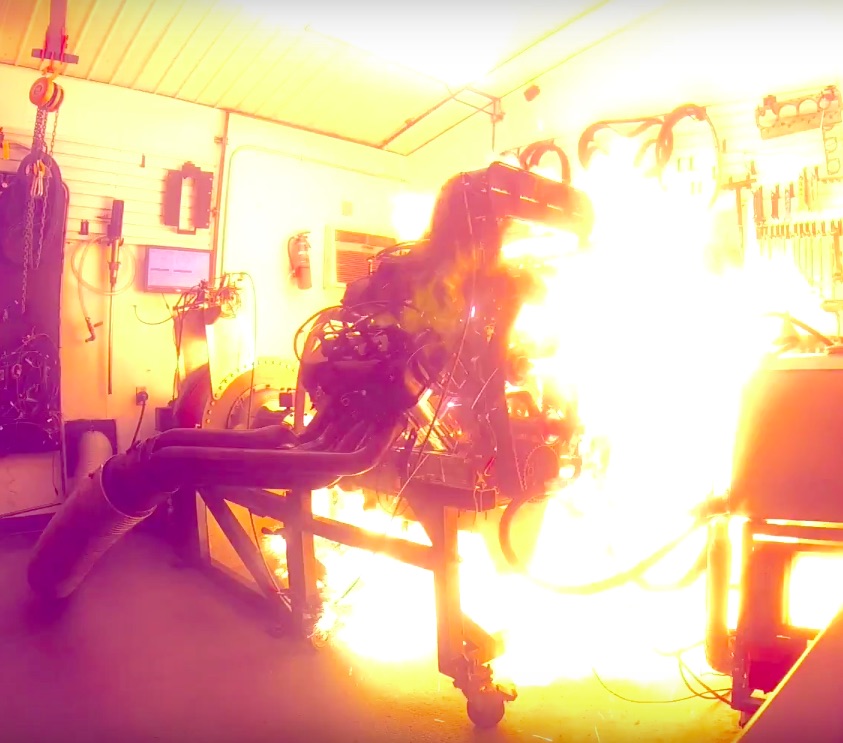 When things go wrong with an engine that makes thousands of horsepower they go wrong very quickly and they go wrong violently. Such is the case in this video where we see what looks to be a Fontana style hemi with a huge blower on it making a dyno pull. The engine starts and idles OK but at the top of the pull (and right around 1:52) something falls off the motor and a second (or less) later, there is a massive explosion accompanied with fire and ultimately with oil literally cascading out of the bottom of the engine. While we don’t see the side where the action was, it may be fair to assume the thing threw the rods out and hot oil hitting the headers is what caused the brief but spectacular looking fire.

The guys in the cell handle the whole thing like pros with one knocking the remaining fire out with an extinguisher while the other makes sure that the whole thing is shut down. The video ends with the mill sitting there silently with the oil pooling beneath it.

We think that this is a Fontana hemi (Hemi headed big block Chevy style block) because of the magneto location. Obviously on a 426 style engine the mag hangs off the passenger side of the thing but here the plug wires are clearly running over to the driver’s side and that is what we were going off of. Either way, we’re interested in your opinion on what caused this mess to happen. Does the small part hitting the floor at 1:52 in have anything to do with it?

Also, would you be able to keep as calm as these guys do in the dyno cell?! We’d either be freaking out, weeping, or trying to find a place to clean out our shorts after being within close proximity to this mess.

Bubba Wallace Found Out What Driving A NASCAR Stock Car Without Any Brakes Was Like Last Weekend - OUCH This 1975 Pontiac Astre V8 Swapped, Clean, and The Cure For The Common Vega