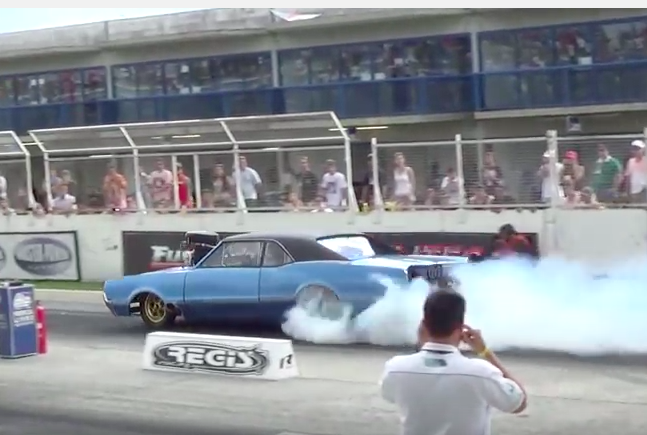 Want to know how hardcore our drag racing brethren are down below the Equator? They try to run a blown, hemi powered Olds in the beginnings of a rain storm at this strip! It wasn’t like this was a surprise to anyone as the driver saw the windshield getting wet as he backed up from his burnout and the drops falling from the sky seem to be unusually large as the people scurry around the starting line. The result is also not much of a shocker. We kind of want to give the guy credit for trying. Then again we’re also kind wondering what the hell the point of the exercise was in the first place.

The track that they are running at is the Curitiba Autodrome a multi-use facility that truly defies the term. A road course, a drag strip, and gathering spot for gear heads you’ll find everything from the stuff in the video below to Formula Truck, open wheel racing, world touring car racing, and more at this place. The strip is the long straight used on the road course so while it is not a 100% dedicated drag facility it is part of a track and seems to be professionally operated from the various footage we have seen and shared over the years.

Being that we don’t speak Portuguese here the one thing we’ll tell you is that we scoured the internet for information on the car and the only stuff we were able to find as discerned through photos. We’re thinking that a large part of this car is steel. The hood is not but the front end, fenders and that stuff could be metal. We know nothing of the specs on the hemi, just that it is there in the first place. We do know that it does’t work for crap in the rain. Who’d a thunk a blown hemi powered Olds would struggle in these condition?!

Press play to see how this works out – Rain is falling and big power on tap!

Aerospace Components Back To School Sale! 25% Off And Free Shipping - Buy Now! Here's a Curious, Sharp-Looking Javelin For Sale In AMC Racing Livery