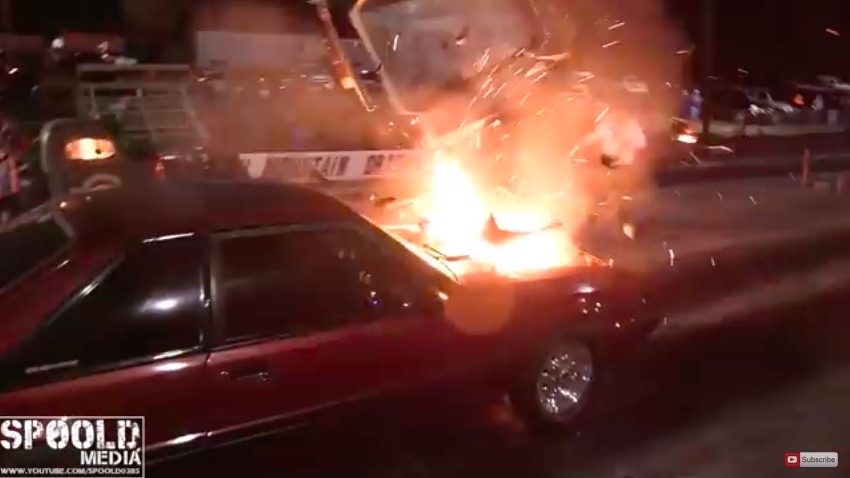 Boy, this is about as violent as an intake manifold explosion comes outside of the world of professional level drag racing. You are going to see a nasty sounding little Mustang at English Mountain Dragway get up on the two step and then turn into a rolling version of Pompeii.

Mountain Dragway in Newport, Tennessee is a cool place that’s one of hundreds of small, mom and pop drag strips across the USA. The places where people from the local community can go and hang out, can go and see cool stuff, and can go and test their mettle against other hot rodders in the area. It’s the kind of place that defines the sport of drag racing’s grassroots and humble nature. Not a pretentious monument to wealth, but a fantastic little battlefield of speed.

Anyway, on this night the track had been stripped and the event that was being run was a no-prep style race. We do not know how deep into the competition we are here but we do know that it ends in a violent hurry for the competitor in the Mustang.

How does this happen? Something ignites the load of fuel and nitrous oxide in the intake manifold and it all goes up and once. In the case of this plastic intake manifold equipped LS engine, it blew the thing apart like a child’s toy. The escaping pressure shot the hood off and that was that.

Lastly, how about the dudes on the starting line waiting for the driver to get out with his own extinguisher to put the fire out. No one was in a panic, but no one was really rushing to get the fire out either. The driver blasted it out with one quick shot from his little extinguisher. More evidence as to why you should always have them.

2019 Spring Carlisle Photo Coverage: In The Age of The internet Are The Swap Meets Suffering? The Restoration of This 1930s Thor Pneumatic Gun Drill Is Awesome - Ever Seen One of These?