Remembering A Character: Watch The Late Tony Christian Thump Them All In Pro Stock In 1988 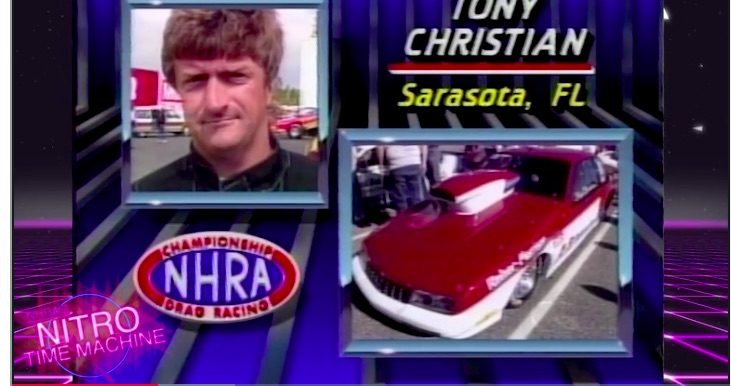 Editor’s note: The announcement that drag racer Tony Christian died yesterday took the sport by shock and sadness. One of the most colorful characters in drag racing from the 1980s through the 2000s, he was loud, brash, outspoken, and damned fast. His career kicked off in the 1970s with a Modified Eliminator car and grew from there.

His success in NHRA pro stock saw him garner three national event wins in the late 1980s and early 1990s but that would not be the most widely remembered part of his career. That came by way of a 1957 Chevrolet and through a foil known as Pat Musi. Christian, Bob Reiger, Annette Summer, Musi, and a cast of characters took the NMCA Pro Street division and launched it into drag racing’s stratosphere. The rivalries were real, the competition was nuts, and the entertainment value was off the charts. Christian won races and became a highly popular figure in the sport at that time.

I last saw Tony with Al Tucci at Bradenton, Florida during the 2021 Snowbird Outlaw Nationals. The two Chicago guys chatted it up. I surely figured to be seeing him again this winter. Alas, that is not to be. RIP Tony Christian.

If you grew up loving drag racing and came into the sport sometime in the 1980s you know every player in this video. From Warren Johnson to Bob Glidden, and perhaps even Don Beverly. You even know Tony Christian but likely not in the way you will see here. See, Christian was a killer NHRA racer in modified eliminator back in the 1970s and he was a solid pro stock racer in the 1980s notching three career wins and that’s cool but it’s not the spot that most fans in their 30s and 40s remember him from. Christian’s greatest fame in drag racing came in the pro street wars between he and Pat Musi during the 1990s.

Musi was also a pro stock racer turned pro street killer and when the attitudes of a New Jersey guy and a Chicago guy collided on the strip, the sparks flew. Must and Christian along with their cars, the famed Popeye Camaro and the 1957 Chevrolet that Tony wheeled were household names to guys like me because week in and week out they would be talking trash on each other over the TV, in magazines, and other places. It was a great time and it was all rooted in pro stock.

Christian’s smart-aleck quips and infectious fun during his top end interviews here are awesome. The best coming after the final round. Watch this!

Hit the image below to see this awesome Tony Christian time machine from 1988! 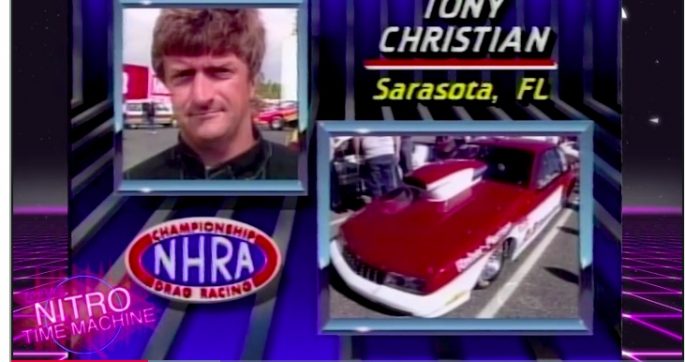