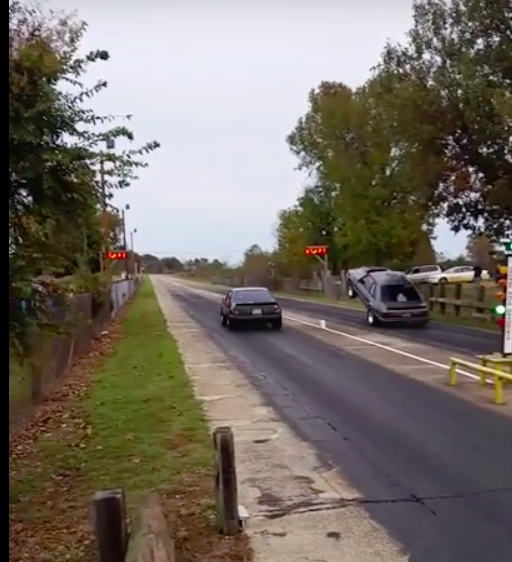 George Ray’s Wildcat Drag Strip is one of the most interesting and spartan places you’ll see race cars run in this country. While George passed away a few years back, his family continues to operate the strip that he built on his own property back in 1961. It is a true “race at your own risk” type of track and there are a ton of cars and racers out there who love to get their drag racing fix in this manner. Being that they have been operating for more than 50 years, I think this is a fair statement.

Over the years as cars have gotten quicker and faster the track has gone from a competitive length of a quarter mile to its now eighth mile length and while the surface ain’t exactly Indy, you’ll see from this video that it still works plenty good because Trent Kisner puts his car on the bumper for nearly the entire eighth mile distance of the race he’s competing in. Like the Malibu crash we showed you earlier, it is no wonder that this style of drag racing is so popular in every part of the country. The big power, lack of wheelie bars, and potential to see stuff like this one every run have put fans back into the mentality many had during the 1960s when there was no possible way to predict what would happen from run to run.

Kisner is no stranger to George Ray’s as he’s set and reset the track record there in the same LS powered Mustang you’ll see him take to the skies with here. If you watch this video in full screen mode you’ll be better off. The dude or dudette filming isn’t exactly George Lucas so the larger screen helps out. At the very end you’ll see a massive cloud of smoke. We’re guessing that is dust and stuff being kicked up along with maybe an oil filer biting the dust.

A true wheelie for the ages!