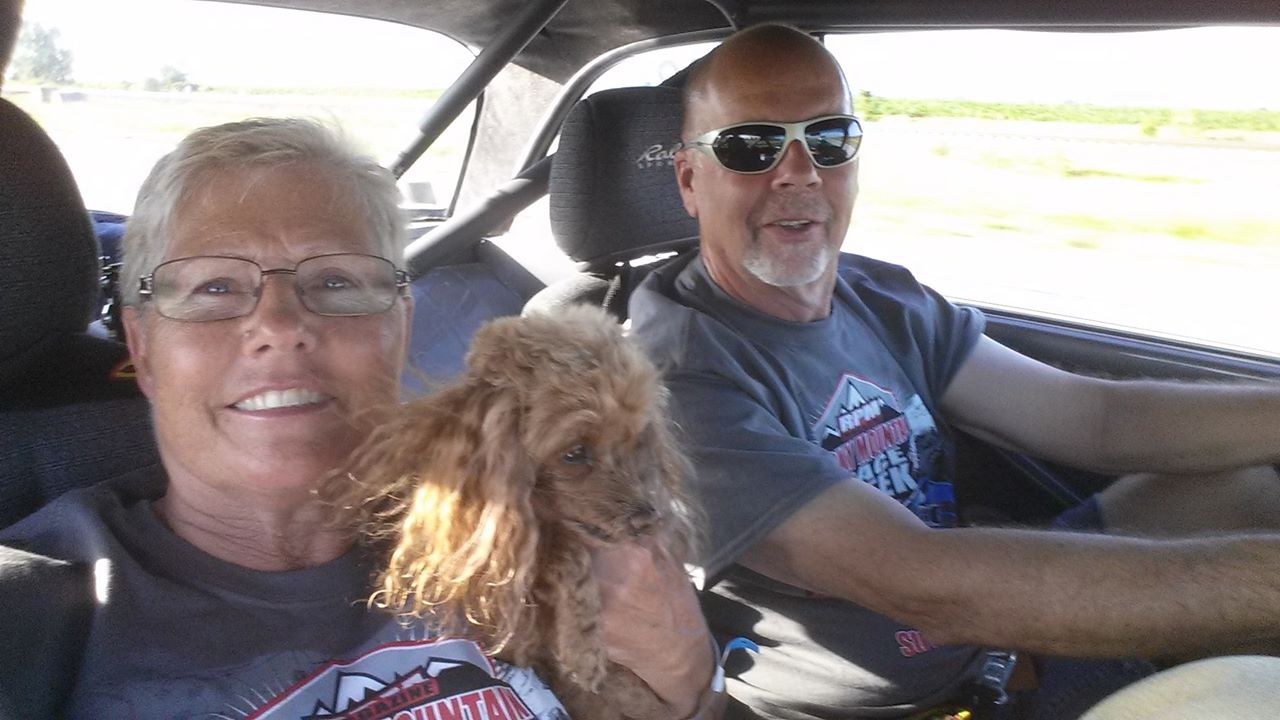 (Words: Donnie Andrade/Photos: Billie Lou Philp) As everyone is pulling into Denver to kick off 1320 Video – Rocky Mountain Race Week 2020 at Bandimere Speedway tomorrow morning, we wanted to share some of the RMRW stories of Jim and Billie Lou Philp. Jim and Billie Philp have been competing in Rocky Mountain Race Week since 2016 in their 1961 Ford Falcon with a blown big block Chevy and a Powerglide transmission. I asked what got them interested in doing RMRW and Billie said, “Jim was turning 70 years old that year and RMRW had been on his bucket list since hearing about it the year before.” Of course, his wife of almost 50 years at the time, Billie Lou was his choice as a co-pilot. They could not leave home without their trusty traveling companion, their red poodle named Roxy. Roxy has been along for all the Philps RMRW adventures and travels with them almost everywhere they go. They start their RMRW trip off each year from their home in Lake Havasu, Arizona and always look forward to seeing friends from their 35 plus years living in Colorado Springs, Colorado as well as meeting new people along the way.

Rocky Mountain Race Week 2016 being their first trip, they met up at each track with their good friends and Road Weekers, Ron and Sandy Riggs. Ron and Sandy were making the trip in their motor-home, so Jim and Billie stayed with them each night. That first year they did not have a Gear Vendor installed and were only able to cruise at about 60 mph from track to track. That made for some early mornings and long days, but they loved every mile of it. For the 2016 trip Jim & Billie pulled a U-Haul trailer that was a little bigger than what they needed but allowed them to help a fellow Race Weeker which made them happy. Just outside of Pueblo where Jim & Billie had made a stop, Bob Ruppel pulled in with motor problems. With the help of Scott Pasionek, Scott V, Billy Costello, Mike Frustaci, Bobby Ruppel, and Dylan Riggs, they swapped the motor and got Bob back on the road. Bob wasn’t pulling a trailer that year and Jim & Billie had enough room in the U-Haul trailer that they were able to carry Bob’s short block back to Kearney where he had someone else haul it back to St. Louis for him. 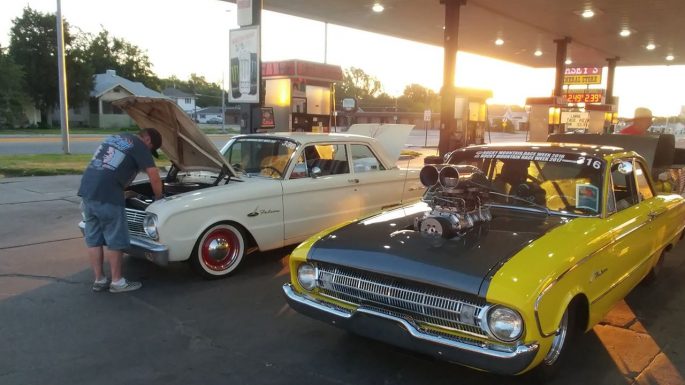 The Phips Falcon runs a 10 gallon fuel tank and Jim & Billie have to stop about every 50 miles for fuel. They haul plenty of fuel with them and won a special award in 2016 for “Most Fuel Stops”. In addition to the special award, another fun memory Jim & Billie shared with me was meeting their first fan at a Sonic in Salida, CO. A young man came over to talk with them and take pictures of the Falcon. He was so excited to see the car in person after seeing a 1320 Video piece on it titled, “BLOWN Ford Falcon @ Race Week – BUCKET LIST!” (A link to the video is at the end of this article.) Jim & Billie runner-up’ d in 2016 with an average of 10.865.

Jim & Billie had such a good time competing in RMRW 2016 there was no question for them about returning for 2017. For 2017 Jim installed a Gear Vendor which made the trip a little easier. He also fabricated a custom enclosed trailer from a jet ski trailer which he setup specifically for RMRW. They traveled as a pair with another Ford Falcon, their good friend Mike Farmer’s son Jeremy Farmer. That year Jeremy broke his rear end at Bandimere and the Phips went on by themselves to the rest of the tracks. Ron & Sandy Riggs came along for the trip as a Road Weeker again in their motor-home, meeting up with Jim & Billie each night at each track. 2017 was also a great year because while in Pueblo they had a lot of their friends from Colorado come out to watch them race and visit with them. The Phips finished the week in 3rd Place in True Street with an average of 10.885. Jim & Billie decided to give their 2017 plaque to Ron & Sandy for following them along the trip and giving them a place to stay each night. Billie said, “2017 was such a great time. We met even more people that year that are now good friends of ours.” 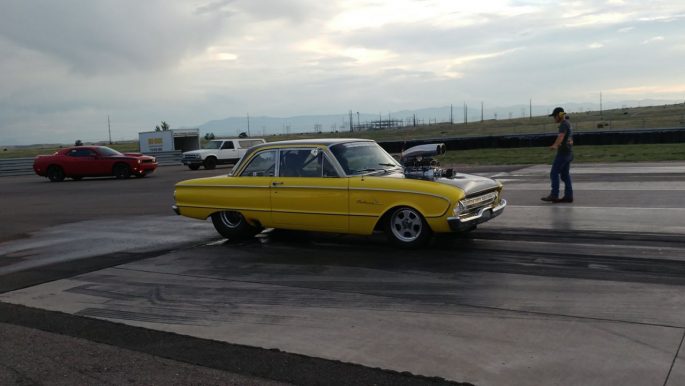 In 2016 and 2017 they only had to change the oil and spark plugs and were without any major issues. Moving onto 2018, Jim & Billie ran into their first mechanical issue of their RMRW trips. In Topeka, Kansas at Heartland Park, they started having transmission problems and thought it was going to need to be tore down and rebuilt. Jim told me, “A local guy in Topeka and some guys from Denver offered to help pull the transmission but it turned out it was just in the linkage so we got it fixed and got back on the road.” At Ozark Raceway that year, Jim ran a 10.4366 on his 2nd run, but he blew a blower gasket. It just so happens that Billie’s sister lives close to the track and her niece was able to take her to O’Reilly’s to get a new gasket. “Matt Frost came over as we were ready to put the blower back on and said, ‘Billie doesn’t need to be lifting on that thing so I’ll help you put it back on.’ He said, ‘I can break the rules up over this so that you don’t have to try to set it back on by yourself.” Jim said. 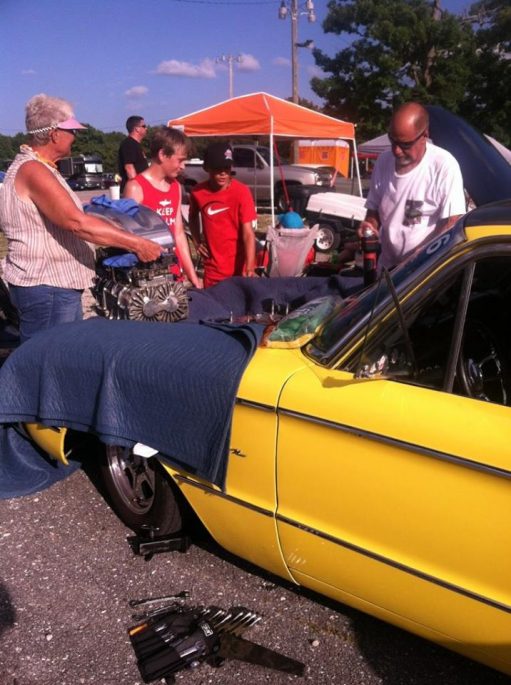 From there they headed back to Noble, OK for the next race. It rained most of that drive and they came across Adam Crego who was having some issues and tried to help him while it continued to rain. Adam had helped them with the transmission problem they had back in Topeka and they wanted to help him as well. The group of them did not get to Thunder Valley until about 2:30am that night. Jim & Billie were not happy with the runs at Thunder Valley and hoped for a better outing at Great Bend. Once at Great Bend, they made two passes before the storm started to roll in. Billie told me, “Everyone started putting their cars in their trailers and those who did not have trailers were able to pull into one of the buildings at Thunder Valley. We all ate in there and they did awards in there too.” Even with 2018 being the first year they had some mechanical issues, Jim & Billie said it was still a great time and they were happy to have Ron & Sandy Riggs along again for the fun that year. They headed back to Arizona already planning for RMRW 2019.
Ron & Sandy Riggs were not able to make RMRW 2019 as Road Weekers for the first time since the Phips started competing in RMRW and were missed by everyone especially Jim & Billie. The Phips left their motor-home at Jeremy Farmers place and travel with him from track to track. 2019 started of at Pueblo Motorsports Park and Jim made a couple good runs before calling it a night. They then headed to Bandimere and while they did not have rooms in Denver for the night, Michael Frustaci who they met during their first RMRW in 2016 was gracious enough to let them stay at his place as well as Jeremy and his kids. Billie said, “It was a party, the Ruppel’s – Bob, Angie, Bobby, Mia and her boyfriend; Adam & Connie Crego, Jim and I, and Jeremy and the kids all stayed and had a great time.” The next morning at Bandimere the weather was looking pretty iffy so they had to wait it out before getting a couple of runs in.
The next day was the drive day to Kearney and the weather continued to be spotty for that leg of the trip. It rained off and on while they were at Kearney, but they managed to get a run in before leaving for Julesburg. Jeremy ran into an alternator issue so they stopped at parts store and fixed it before getting too far along. “It was about 1:00am when the group arrived at Julesburg and it was very windy.” Billie recalled. They slept in their car that night and woke up the next morning ready to race. Jim told me that “Julesburg was a pretty nice day. We got a couple of good runs in and were ready to head to Pueblo for the last race. They saw Sam Harvey in Sugar City and stopped to help him plug a tire and then were back on the road to Pueblo. Billie said “It was really windy when got to Pueblo. Dust blowing everywhere. They wanted to wait for to calm down before racing and asked all of the racers if they wanted to race or just use the times from the first 4 tracks. Most everyone wanted to race and as it was getting dark the wind let up enough so we could. Everyone finished up and the awards were around 11:30pm.” Jim finished RMRW 2019 with a 11.061 average and already planning on being ready for 2020 before ever leaving Pueblo that night. I asked Jim what about Rocky Mountain Race Week keeps him coming back year after year and he said, “The people. All of the nice people we’ve met. From Matt and June and their kids, to everybody we’ve met.”
Jim and Billie came to Colorado a couple of weeks early to visit with their friends and for Jim and Mike Farmer to look the car over and get it ready for the trip. They are very excited to start their 5th Rocky Mountain Race Week tomorrow and look forward to seeing everyone. And of course, Roxy will be along for the trip.
Out Of Sight, Not Out Of Mind: Going Underneath Vice Grip Garage's Big-Build Crew-Cab Square-Body Rough Start "Tour Of Temptation": 1994 Dodge Ram 1500

One thought on “Where The Rubber Meets The Road, Part Two: Jim & Billie Philp”