Wild Video: Watch An RX7 Use An Altered As A Launch Ramp At A Drag Race In Australia 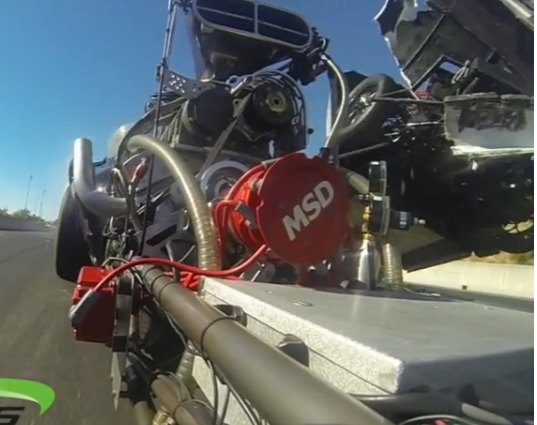 The shutdown area is one of the most dangerous places to be at a drag strip when cars are running. Logic would probably tell you that, right? After all, at that point on the course the cars are traveling at super his speeds, they could be moving around a bunch, and there’s just no telling what could happen on any given minute. This video reinforces that point by showing a bizarre incident that recently happened in Australia.

Trent Morrison has just wrestled his blown altered through a lap. The parachutes were out and he was slowing down. Unbeknownst to him, racer Paul Carey in the other lane was having some big boy problems and Carey was heading directly for the rear of Morrison’s altered. The video you are about to see shows what happens next from a unique vantage point. It looks like the camera is mounted to the top frame rail of the altered and it is aiming backward, towards the starting line.

You see the car take a jarring blow, some body pieces fly, and then shortly thereafter you’ll see Carey’s RX7 literally vault into the air and take flight, thankfully peeling away from Morrison as opposed to on top of him. This one could have cut either way but thankfully for everyone it went the “good” way and Carey did not land on top of the slowing Morrison. High speed rear ending accidents are pretty rare in the shutdown but they’re all violent. At New England Dragway in 1978 funny car racer Tim Kushi rear ended Tommy Ivo in the shutdown area while making incredible speed. Both cars were completely destroyed and thankfully neither man was seriously injured. It doesn’t look like Morrison’s car suffered much in the way of damage from this incident. Carey’s RX7 looks completely annihilated.

Thanks for the tip, Bret!

PRESS PLAY BELOW TO SEE AN RX7 TAKE FLIGHT AFTER REAR ENDING AN ALTERED!

Unknown Parts Guy: Dealing With The Species Known As The Mega-DB Check Out The Behind The Scenes Jeep Photos From Backroad Gold!

4 thoughts on “Wild Video: Watch An RX7 Use An Altered As A Launch Ramp At A Drag Race In Australia”