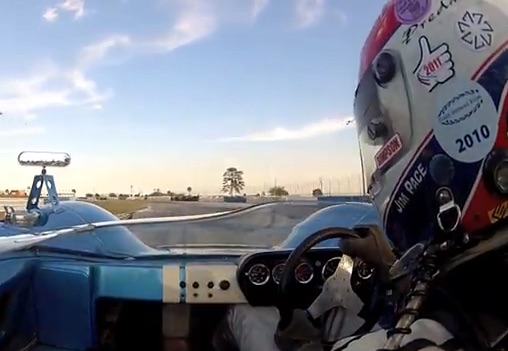 Jim Pace is our adopted maniac road racer here at BangShift. Pace is always wheeling something awesome and lots of times it is vintage or historic. In this video he is running an old Lola T70 Spyder Can-Am car around the Sebring road course. The track is being run in its 12-hour configuration and that means it is 3.74 miles long and has some really fast straights. You’ll see Pace working the wheel like a pro during this lap, but our favorite parts are when he’s able to let the big Ford V8 behind his head eat a little. When Pace is able to lean on the car it gives an amazing perspective on just how fact these race cars are. We’ve said it a million times, but one of our great laments is being born too late to see Can Am racing when the series was in its prime. Pay super close attention at 1:20. Pace lays the throttle flat for a minute and the car busts the tires loose at speed and sounds hellacious!

Being that this car is a Spyder and has no top, we’re guessing that it was from the 1965-1966 era. The Lola T70 was a great car and took race wins at places like Laguna Seca during that time frame with Ford power. Lots of them were running Chevy engines in the later 1960s but initially, Ford engines were the hot ticket. That’s another reason we think that this is an earlier T70.

Anyway, Jim Pace is a total bad ass and we’re going to keep him as our chief road racing rock star for as long as we’re around. Why? Watch this video or any of the like dozen other we’ve featured with Pace at the controls. The man can drive like the wind! Hopefully some day we’ll run into him and get him on a go kart track. We’ll get a video illustration of just how good he is by having him humiliate us in public!

PRESS PLAY BELOW TO SEE JIM PACE WHEEL A CLASSIC CAN AM LOLA T70 AROUND SEBRING! AMAZING NOISE AND SPEED!

A Fast Lap Of The Nurburgring Nordschliefe...In The Snow, Because The Track Itself Just Wasn't Dangerous Enough Motorized Freak of the Week: Nutso Hungarian Oil-Well Firefighting Tank