A Fast Lap Of The Nurburgring Nordschliefe…In The Snow, Because The Track Itself Just Wasn’t Dangerous Enough 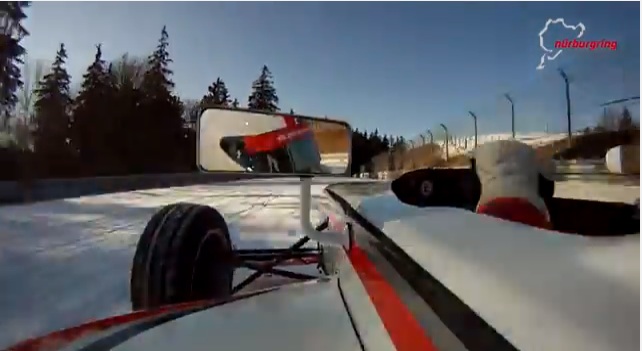 I’m an absolute sissy when it comes to the cold, I’ll openly admit it to anybody. When the temperature drops below 40 degrees Fahrenheit, I start to question whether or not working outside is worth it, and at 32 degrees Fahrenheit, it isn’t. I’d rather sweat all day long than shiver for a minute. So when it comes to the ice, cold and snow, it had better be something pretty spectacular to drag me out into it. This would be one of those things.

Andy Gülden is the Chief Driving Instructor at the Nurburgring. And apparently Mr. Gülden either has spent way too much time in Scandinavia practicing his snow driving techniques or really does have ice water in his veins, because he broke out one of the Nurburgring Formula open-wheel cars just to do a lap of the track while it is covered in snow and ice. Sounds like a great idea, doesn’t it? His control of the car is masterful through the snow, with his foot working the throttle like a rally driver and his hands working the steering wheel like a drifter. If it were us there’d be a pile of mangled metal next to an Armco barrier, with the spoiler pieces being used as the arms of a sad snowman.

Click play below to watch some open-wheeled snow-drifting fun!

4 thoughts on “A Fast Lap Of The Nurburgring Nordschliefe…In The Snow, Because The Track Itself Just Wasn’t Dangerous Enough”