Jun 07, 2022Brian LohnesApex Video, BangShift APEXComments Off on This Vintage Motorweek Review Of A 1985 Dodge Shelby Charger Is Great – These Were Good For Their Time 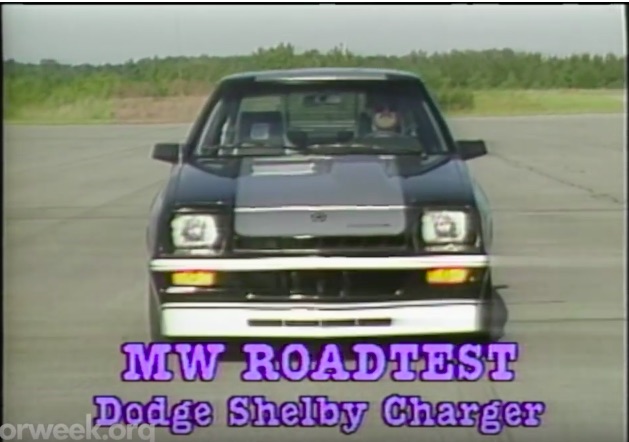 Jay Leno often says that the last days of an old technology are better than the first days of a new one. The 1985 Dodge Shelby Charger lived up to that adage perfectly as it was the last year for production and the car was definitely the best of its breed. Turning to Carroll Shelby for help in spicing up the otherwise said Charger at the time,the result was one of the best bucks down performance cars of its day. Yeah, yeah we know that the numbers are not exciting and a modern mini-van would likely wax this thing hard in almost all metrics but you have to look at cars in their proper context and in the context of 1985 this was reason for performance enthusiasts to get excited.

We dig the paint scheme on this thing, we dig the seats and other aspect of the interior (not the dash…bleck) and we also dig the fact that the car was more than just some stickers and extra body cladding. While we’re not sure these cars will ever be “collectable” in the sense that old muscle cars are, it seems that there’s always a market for performance cars that have a limited production run, right?

We always talk about the mid-1990s as being the time when performance really returned to Detroit but the reality is that cars like this were the candles that kept the performance room from completely going dark in the 1980s. As a car of today it ain’t all that much. As a car for 1985 it was the world.

This 1970 Harley-Davidson Video From Bonneville Features, Bikes, Cars, Bikinis, and The Endless Salt Wild Video: Ride Along On A GSXR 750 Powered Go Kart As It Attacks A Road/Autocross Course - Awesome!