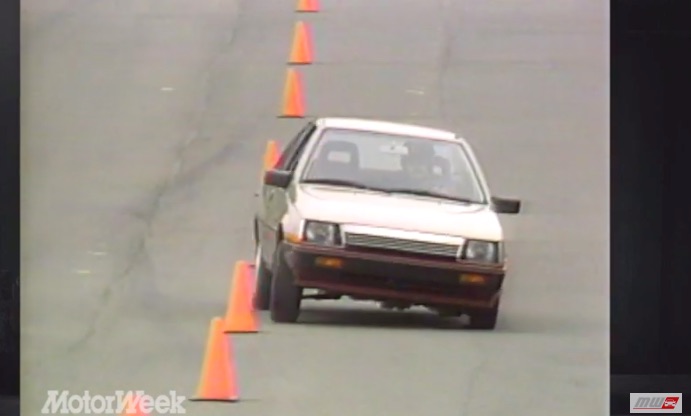 The magic of the 1980s was that there were weird cars kind of falling out of the sky on a regular basis. Today, that does not happen anymore. There are very few surprises out there. People have their lineup and they make a car to fit each spot in it. Whether it is a sedan, a CUV, an SUV, or a truck, you know what bucket the thing is going to fall into. But in the 1980s? You really did not know what was coming one month to the next. Cars like the 1985 Plymouth Colt Turbo tested here were freaky little numbers that showed what the future would look like.

2,360lbs, a five speed stick, a turbocharged 1.6L four banger that made 102hp, 0-60 times in the 10-second range and quarter miles under 19-seconds meant that this weird little car was really kind of a sleeper for its day. All of those numbers would put in on a pretty even level with the heavier, V8 powered iron Detroit was barfing out.

This is a doubly interesting video because the car is being tested at the famed, and long-dead Bridgehampton race track that was located in Sag Harbor, NY and served as a mecca for American road racers from the 1950s into the 1990s when it was closed forever. Not a lot of video from the 1980s at the course so it is kind of fun to check out the background as the car is being tested. A weird car on a dead track. Two for one, kids!