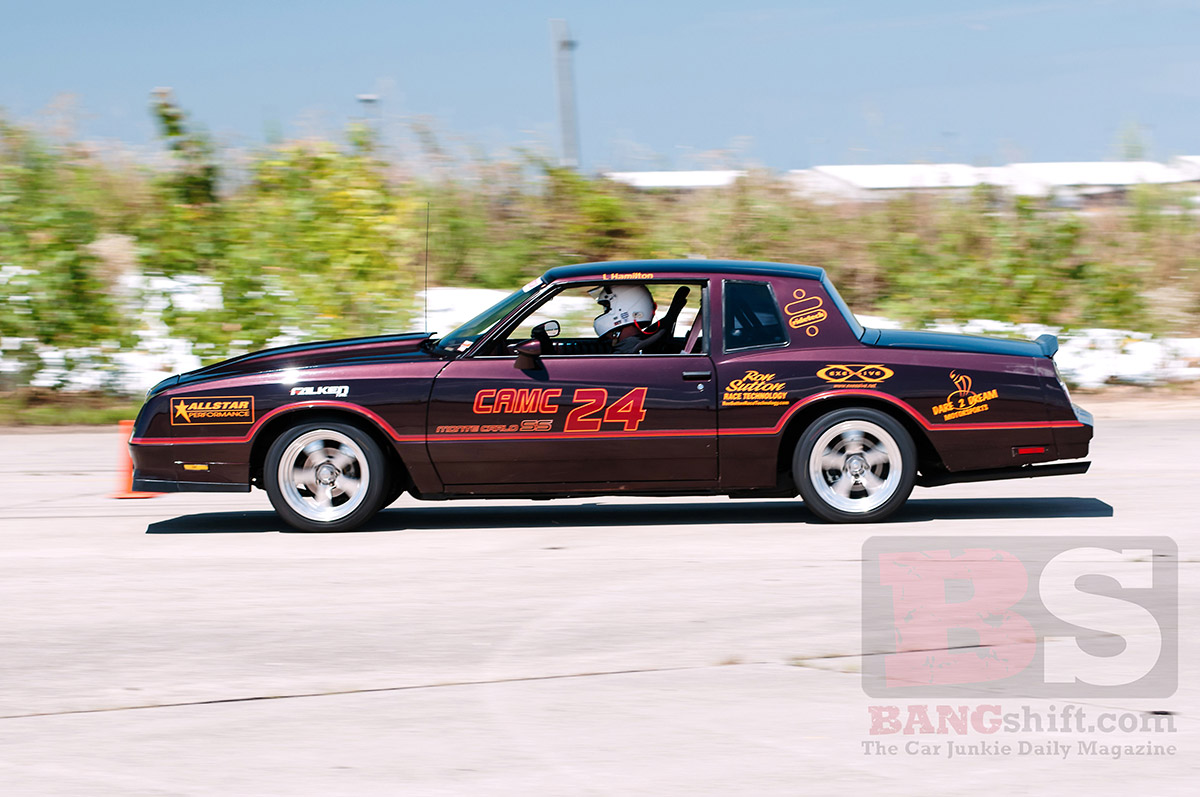 (Words and photos by Dave Nutting)

While you BangShift readers may not realize it, our feature on Lance Hamilton’s 1985 Chevy Monte Carlo SS has been a long time in the making for me. I’ve “known” (In so much as you can know someone that posts on the same automotive message board as you) Lance and his car (Nicknamed “Barney” for its shade of purplish maroon) since December of 2007, when he joined MonteCarloSS.com, one of my favorite online haunts being as G-body obsessed as I am.

At the time, Lance was busy working on taking a pretty darn clean example of a car by any normal human’s standards and making it “Lance clean”. For several years, I read about his adventures in factory undercoat removal, engine pulley refinishing, wiring harness restoration, and general rehab and/or replacement of every nut and bolt that he laid eye on. To finish off the look, he added a set of lowering springs, drop spindles, and 17” wheels to provide a more aggressive stance for his weekend cruiser. Once this was done, Lance took out the old purple dinosaur for a session of autocross with his local SCCA club, the Kansas City Region. This is where his plans of building a nice driver all went to hell and the story gets BangShifty.

You see, a stock G-body is (By modern standards) a big car, one with a full frame and suspension design that dates back to the early 1970s. To be frank, the stock suspension geometry sucks, and adding drop spindles does more harm than good in the handling department. As you would expect, Lance’s first trip through the cones was less than graceful, not helped by the fact that he was dropped into the SCCA’s Street Modified (SM) class along with highly modified modern vehicles as there was no other class in the rulebook that a “1987 Chevy what now?” fit into.

Not to be deterred, Lance continued to race at autocross events as well as hit up the suspension section of the Pro-Touring.com message board looking for advice. This is where Ron Sutton and countless long days and nights of measuring, wrenching, and road-testing come into the picture, and is the starting point for the comfortable cruiser transforming into the cone-dodging G-body that you see today.

IN TYPICAL BANGSHIFT FASHION, WE’RE GOING TO TELL THE REST OF THIS TALE VIA PHOTOS AND MY POUNDING INTO SUBMISSION OF THE KEYBOARD THAT PASSES FOR WRITING 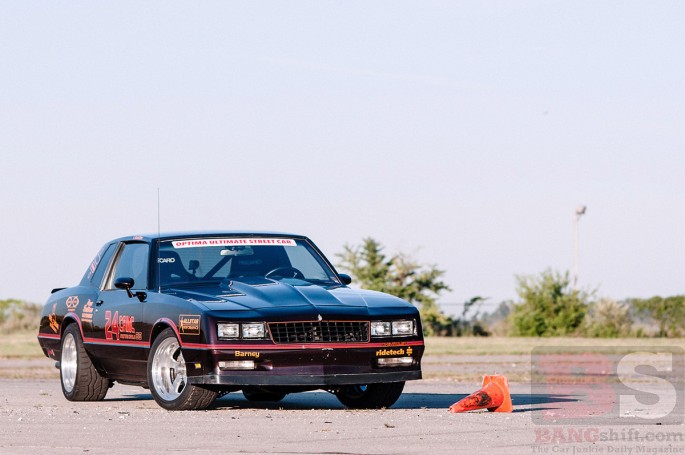 To put the history of the car in Lance’s own words: “I bought it at an auction in 2007, 67,000 mile, original car, garage-kept its entire life. Someone had put headers and dual exhaust on it, but it was otherwise stock. I dropped in the HT383 crate engine but otherwise left it alone. Over the next few years, I fixed the ‘small things’, like replacing the stock 7.5 rear with a Ford 9 inch when the stock rear blew. After putting the drop spindles in it, it just sat for a couple of years. I didn’t want to drive it for fear of it getting dirty. You could eat off of the bottom of that car.” 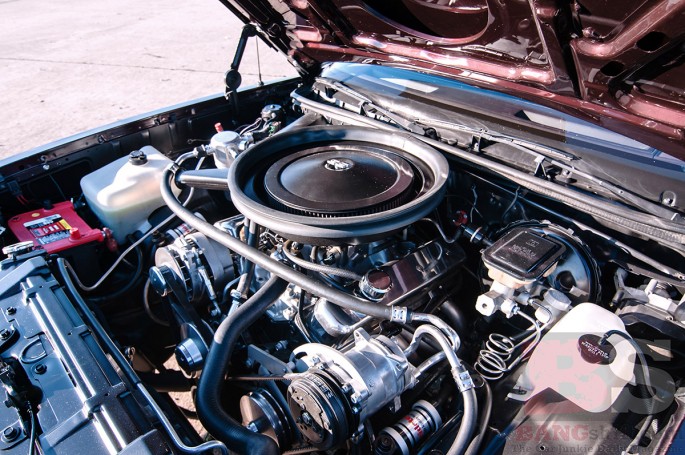 Lance: “Then, in 2010 I went to the Goodguys show at Scottsdale and saw all of these muscle cars going round this tiny course. I sat there and watched it for two hours, and I was just captivated. I could do that with my car!

I went on the message boards, found the local SCCA, and went to a local test and tune. At the time I didn’t know what I was doing, but I just had the time of my life doing it, just going fast on a closed course, and it snowballed from there.” 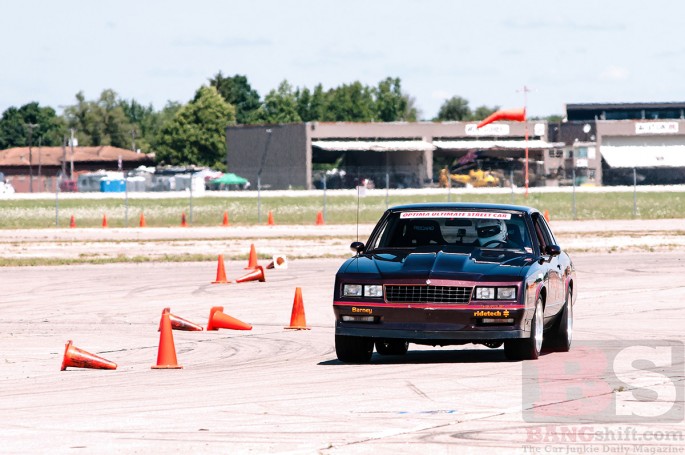 “Snowballed” would be a bit of an understatement, as getting this Monte Carlo to handle was not quite as simple as calling up his local speedshop and ordering a bunch of bolt-on parts. Instead, with the guidance of Ron Sutton of Ron Sutton Race Technology, Lance has spent the last few years in his home garage measuring pivot points, adjusting control arm mounting holes, and testing spring and shock rates at “tuning sessions” in a local parking lot or two, all in the never-ending quest of minimizing bump steer and maximizing tire contact patch. As Lance freely admits, “Ron will give you all of the advice you need, but he’s not coming over and bolting the parts on your car. You’re the one out there late at night measuring and installing“. 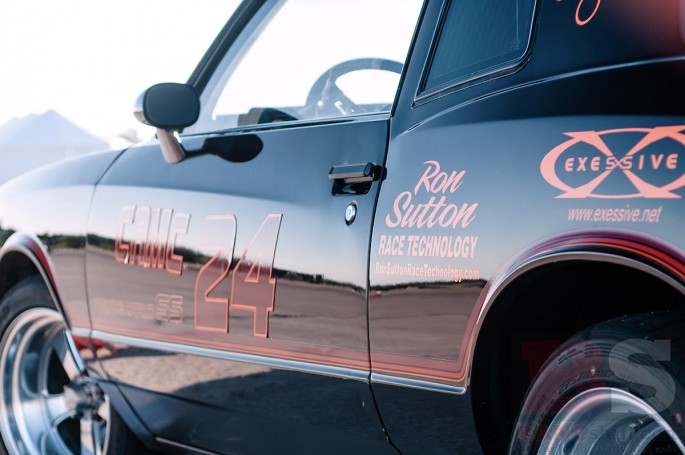 For an on-looker such as myself, that’s one of the coolest and most inspiring things about the car: While the car does have some of the latest Gee Wiz Pro-Touring parts, such as Ridetech triple adjustable coilovers, nothing was added for the “wow” factor, but instead because it was found through testing to be the best part for the job given Lance’s adherence to the Herb Adams strategy of “soft spring, big bar, high travel”, which is the reason why Barney isn’t slammed to the ground like most Pro-Touring cars. 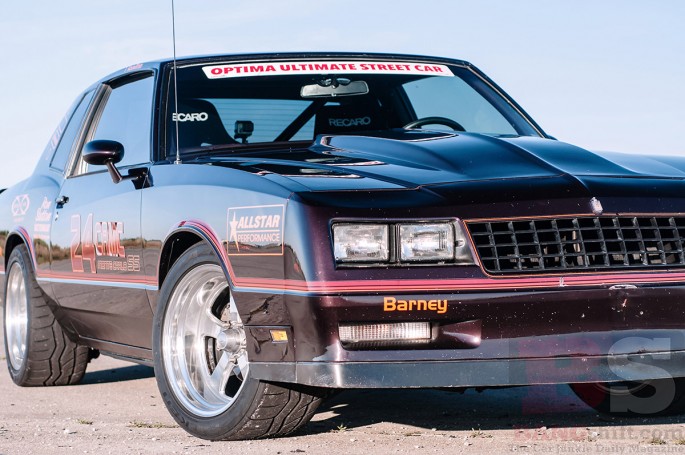 If more proof of his “If it works, don’t fix it” attitude is needed, let the defense submit the stock front rotors as exhibit A: 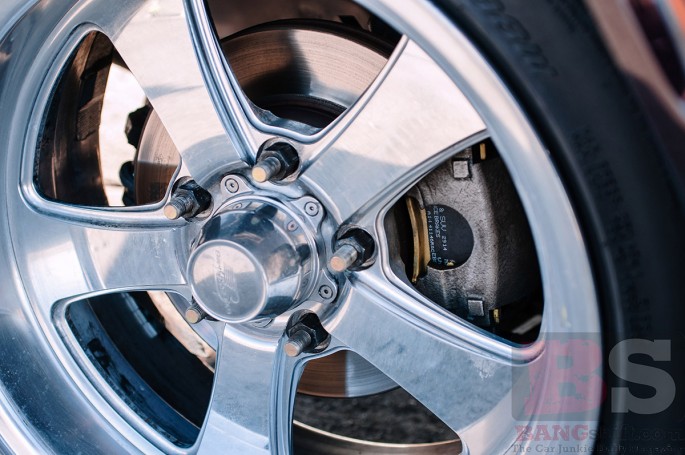 No, your eyes are not deceiving you: That is a stock 10.5″ rotor and oversized single-piston caliper being used in the front. A set of EBC YellowStuff pads and fresh brake fluid is enough to haul this ~3500 lb car down repeatedly without issue, lap after lap. I’ve taken a ride in Lance’s car, so I can tell you first-hand that it stops, and stops well. 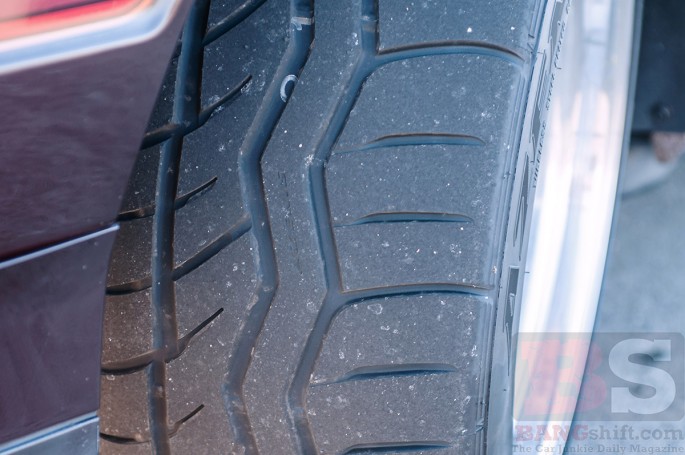 All of that stopping power is applied to the ground through a set of sticky 200 treadwear Falken Azenis RT615K. Barney is shod in 275s all around, but is still considered a “small tire” car in the SCCA Classic American Muscle (CAM) class, as many of his competitors are running 295s or wider. 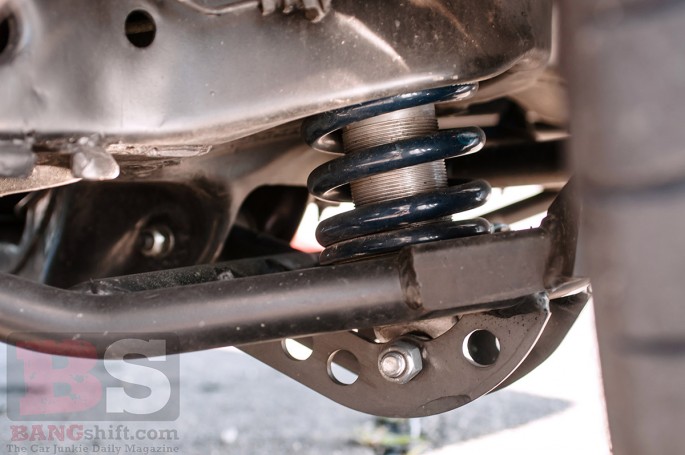 Helping to make up for that tire disadvantage are the changes Lance made to the front suspension in order to maximize his tire contact patch. Detroit Speed upper control arms and the aforementioned Ridetech tripled-adjustable coilovers, bolted to a set of Ridetech lower control arms, are the visible parts of his strategy, but what you don’t see is just as crucial, namely the time spent moving the lower control arm mounts and pivot points in order to maximize caster (Currently set at around +9 or so), camber gain, and reduce bump steer to as near zero as possible, or the hours testing and adjusting the rebound and high speed/low speed compression. Also not shown is the monster (We’re talking nearly forearm thick) Ridetech muscle bar, the latest in a long line of bars that Lance has installed and tested. 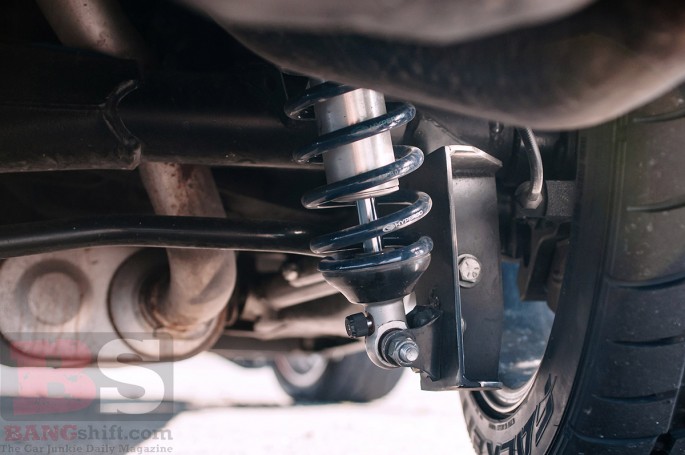 The same attention was paid to the rear suspension, which also features Ridetech triple-adjustable coilovers mounted to home-made brackets. 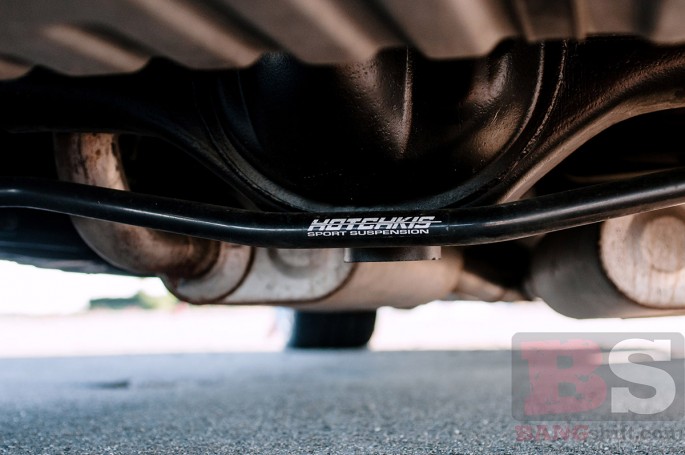 Tying the rear together (Literally) is a Hotchkis sway bar, mounted in stock location between the UMI roto joint-equipped adjustable lower rear control arms. As with the front suspension, Lance went through numerous iterations of rear bar, including a frame-mounted bar, only to go back to a stock-style bar as he found that he was lifting the rear tire in tight corners, as can be seen in the video below. Remember, the tire’s not gripping if it’s catching air! 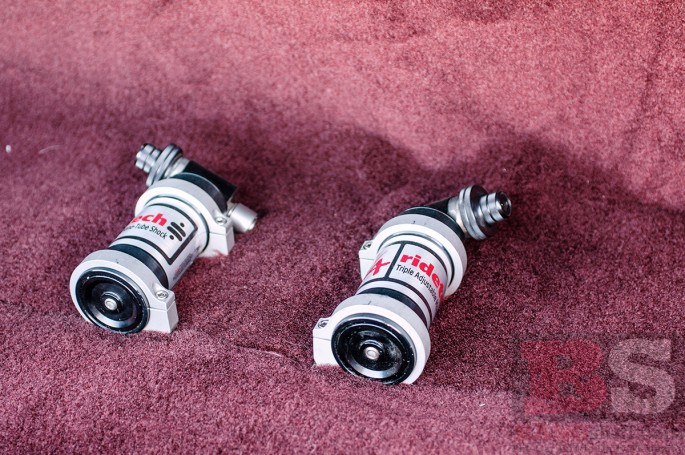 Lest you think that Lance’s obsession with a clean install went out the window once Barney became more race car than street machine, the car still has a trunk carpet to hide the holes that were cut in the trunk for the coilover’s reservoirs. As Lance put it, this was one of the hardest cuts he had to make on the car. 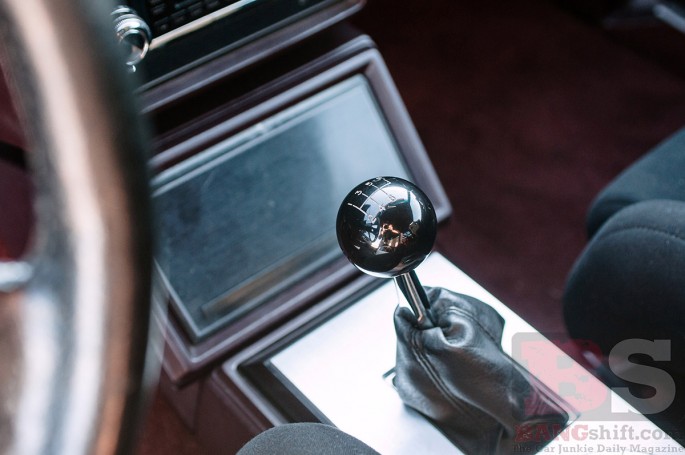 Now, what wasn’t a hard cut to make was the hole needed in the transmission tunnel for the T56. Utilizing a modified 2004R crossmember that allowed him to mount the transmission as high as possible to help with pinion angle adjustment, as Lance told me, “Putting the six speed in the car was pretty special. That really changed the car and made it fun to drive” 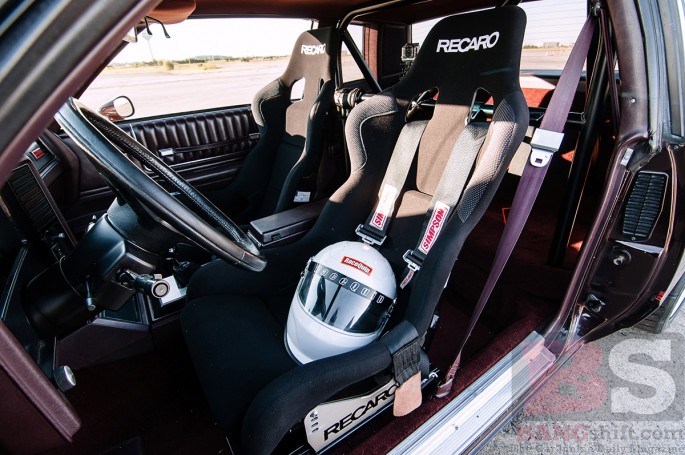 Barney’s slow transition from a street car into a race car is also evident when you view the rest of the interior, as while it retains the stock steering wheel, console, and majority of its interior panels, the factory front seats have given way for a set of fixed-back Recaros and the back seat removed for a rollbar so that  five-point harnesses could be properly mounted. 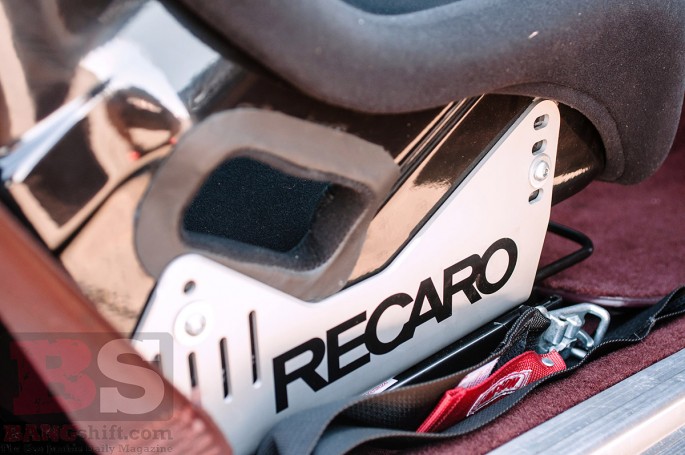 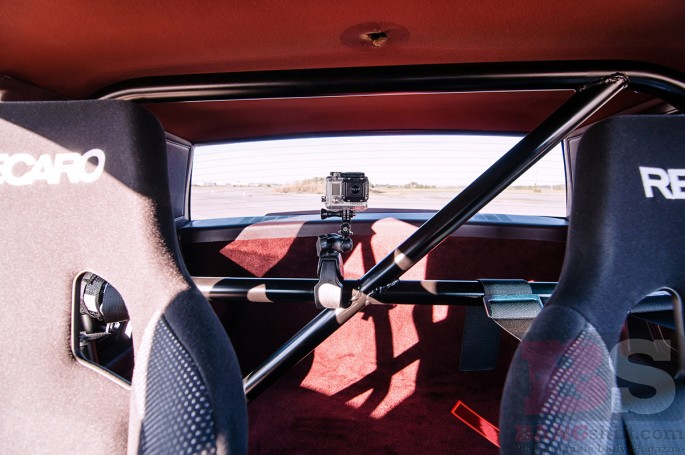 If cutting up the trunk was tough, the decision to add the rollbar was even more so, as it’s one step closer to making Barney more track than street. That said, it was done in the name of safety, and makes for a sweet GoPro mounting spot as well. 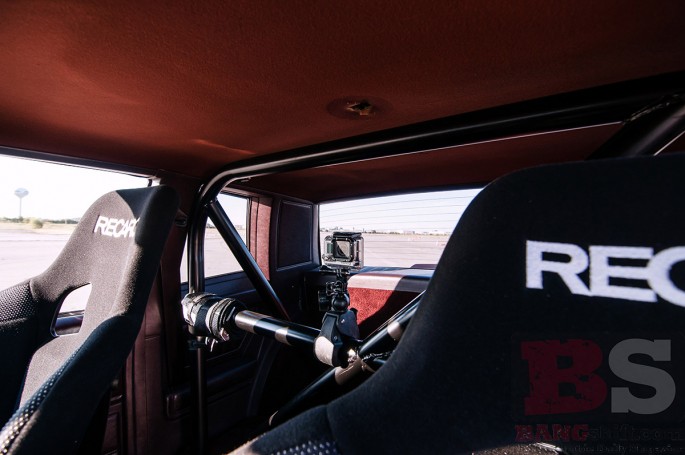 While I was shooting these photos, Lance told me, “There’s no way you’re fitting the entire rollbar in with one shot. No one has done it successfully.” 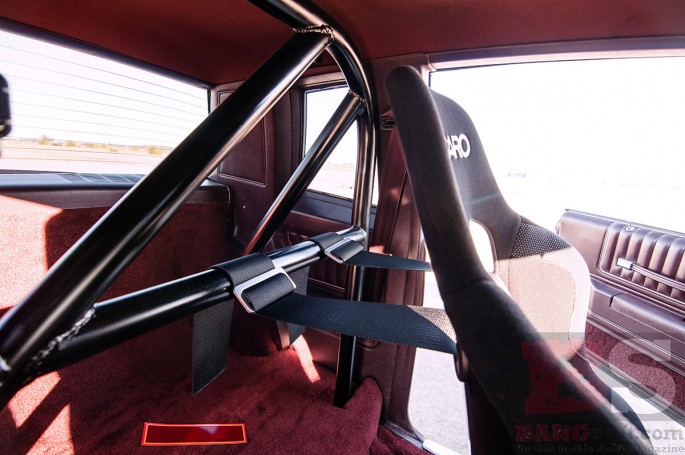 Well, he was right, but don’t tell him I admitted that. 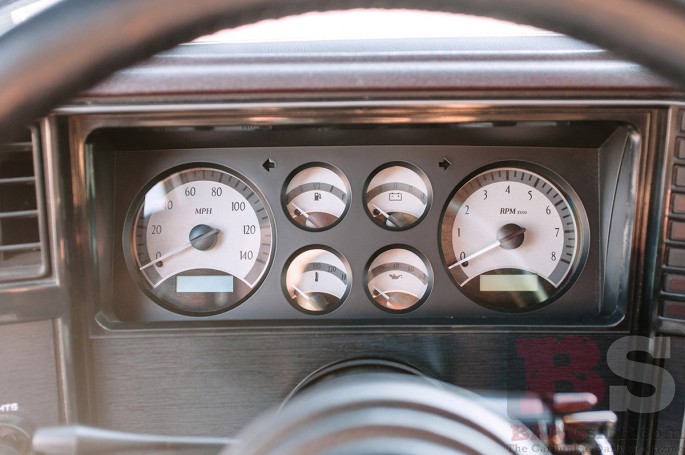 Capping off the list of interior modifications is this sweet set of Dakota Digital gauges, which if you know G-bodies at all are a 100% improvement over stock in that they both look better and actually give you an accurate understanding of the car’s vitals. 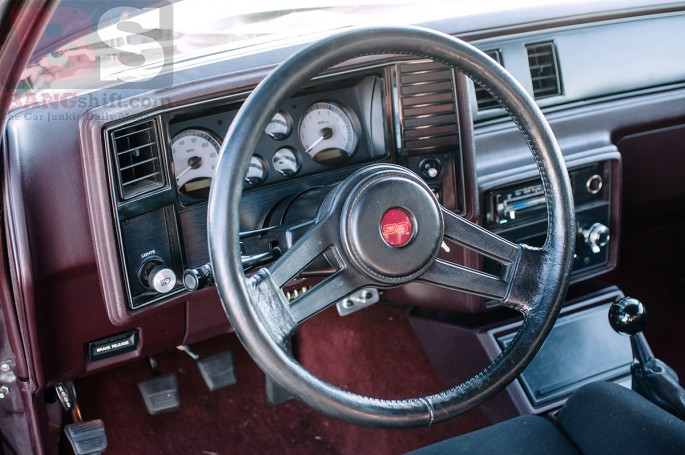 Barney may be getting a smaller diameter wheel in the future, but for now the factory school bus-sized wheel remains. Note the third pedal down below. Can’t beat that. 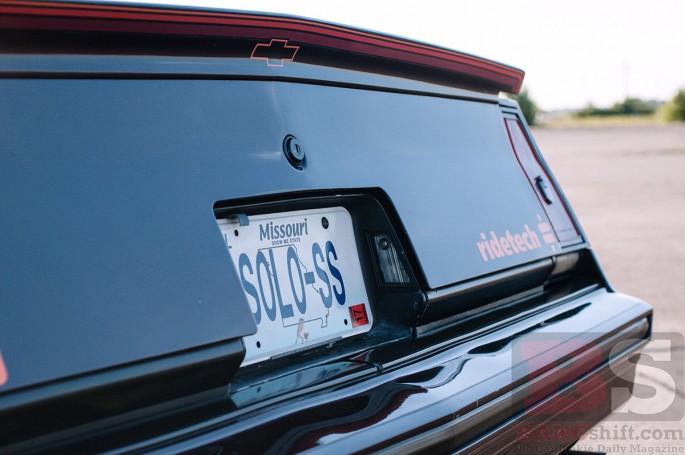 While all of the modifications help to keep this old Monte competitive at both regional and national SCCA events, including the CAM Challenge East and SCCA Nationals, the car is still 100% streetable, with Lance often driving it to work and back with the A/C at full blast. 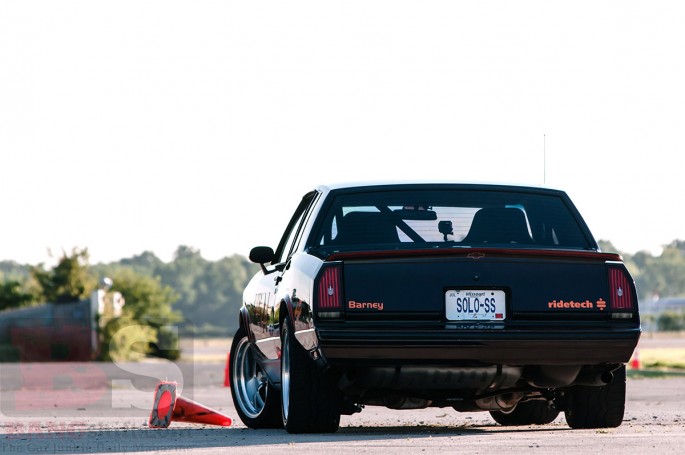 For any BangShifters out there that are interested in autocross but don’t know where to start, Lance has the following advice:

“Find your local SCCA region, introduce yourself, tell them what you want to do, plan on spending the whole day there. Right from the get-go, let everyone know that you’re a newbie. People will go out of their way to help you. People want more people to do it, and they want to help someone that’s interested.

As for your first time out on the course, you’re trying to find your way through the cones. You’re not going to be setting any times, so don’t worry about. Everyone has been there and knows what it’s like, and they’re there to help you. Go out and have fun.” 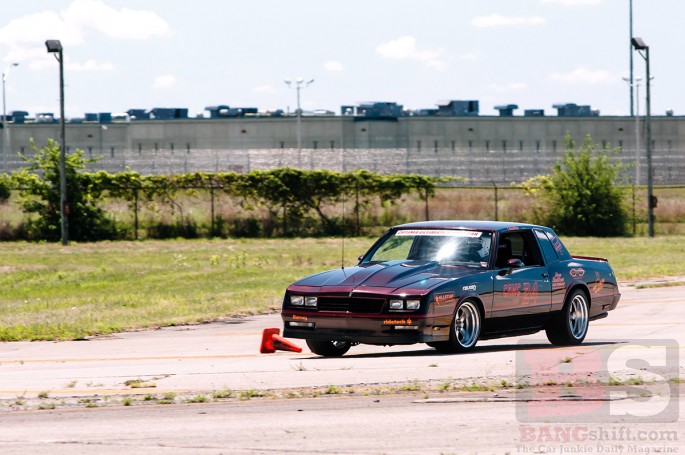 Adding on to that statement, Barney is proof that you don’t need 6 piston calipers, carbon fiber body panels, or even an LSx engine in order to go out and race your car. Don’t be afraid to get out there in your stock (Or relatively stock) muscle car and bounce a few cones off your paint job. Trust me, your car will thank for finally taking it out of the garage.

WE’LL LEAVE YOU WITH A VIDEO SHOWING SOME OF LANCE’S LATEST RUNS FROM THIS LAST WEEK’S SCCA NATIONALS EVENT IN LINCOLN, NEBRASKA

BangShift Project Profile: A Chevy S10 Land Speed Truck...Powered By A Mercedes Turbo Diesel?! Cheap Car Blog War! I Challenge Lohnes To Find A Better Craigslist Deal For Under $1500 Than This 1996 Firebird!