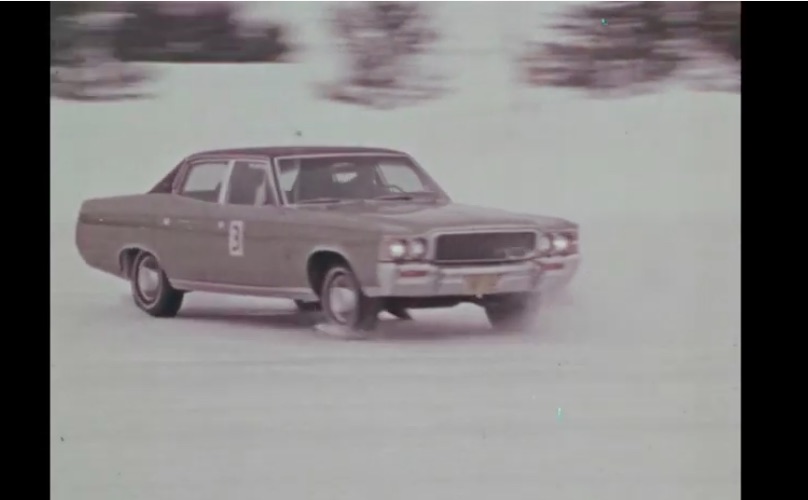 Having grown up in New England my entire life, driving on snow and ice every winter is just something you do. I, like everyone with a function cerebellum has been able to get a little better at it over time than I was at 16 when I had no clue of how to properly operate an automobile in anything but the best of conditions. Also over the time I have been driving massive advancements in tire technology and vehicle technology have made even marginal winter drivers better by not allowing them to do some of the dumb stuff that people usually do before they pile their stuff up into a snow bank. But back in 1971? It was all in the hands of the operator and thankfully one-minute PSAs like this existed to teach everyone how to be better. We’re sure millions of lives were saved by this.

Watching a 1971 AMC Ambassador gracefully spin itself across a frozen lake is one thing. Watching a massive 1971 Chevy Impala avoid some stationary barrels at low speed is another. Actually, it isn’t. It’s the same thing and it’s just kind of funny that the idea of being a better winter driver and avoiding accidents was summed up in one minute’s time. So long as you are driving at walking speed and don’t lock up the brakes, you’re in good shape. Hell, try pumping the brakes. Say what?! Crazy talk, right? It likely was in 1971.

I remember the feeling the first time I ever locked up the brakes on snow and threw the car into full right rudder. It did nothing. thankfully the angle of my trajectory kept me from hitting whoever was up front but damn that was a close one. If only I had seen this PSA!

Dig the cars and the message.

Listen Up: Ron Capps and Joe Morrison Talk Funny Car and Top Fuel On The NHRA Insider Podcast A Study In Steel: Incredible Video Of A Locomotive Being Built In England Circa 1935