Awesome Historic Video: Road Racing on the Streets of Pontiac Michigan in 1975

Dec 07, 2014Brian LohnesApex Video, BangShift APEXComments Off on Awesome Historic Video: Road Racing on the Streets of Pontiac Michigan in 1975 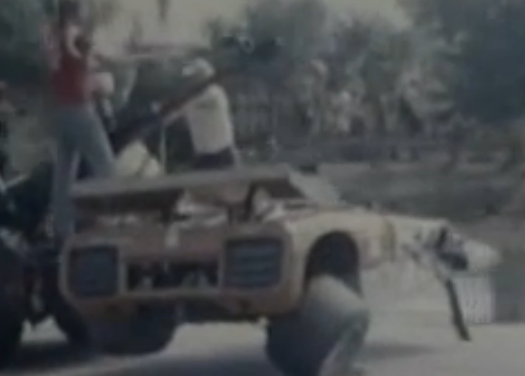 In 1974 and again in 1975 the streets of downtown Pontiac, Michigan were turned into a road course that hosted a couple large scale road racing events. These were “outlaw” events in the sense that they were not sanctioned by the SCCA (as best we can tell). Another rarity in road racing was that the races paid a purse to the winners and top finishers. The poster of the totally neat video we found on YouTube claims to have pocketed $1700 and that was good cheddar for 1975!

The races ended after their short two year run due to the death of talented and popular racer Warren Tope. As these races were essentially Formula Libre affairs that allowed a wide open field of cars, the racers ranged from little Austin Healey Sprites all the way up to McLaren Can Am rocket ships. Tope met his end at the helm of a McLaren when a brake failure sent him at a high rate of speed into the guardrail. Unfortunately for Tope the span he hit was tall enough that his carwas stopped by the roll bar…which was located behind his head.

This video is great. It has in/on car footage as well as a bunch of stuff from the pits, and from some choice vantage points on the course. Tope’s death apparently turned the city officials against the idea of hosting the events and that was that for outlaw road racing on the streets of Pontiac.