Best of 2016: Incredible Photos Of The Astro Spiral Jump During Testing With Video! 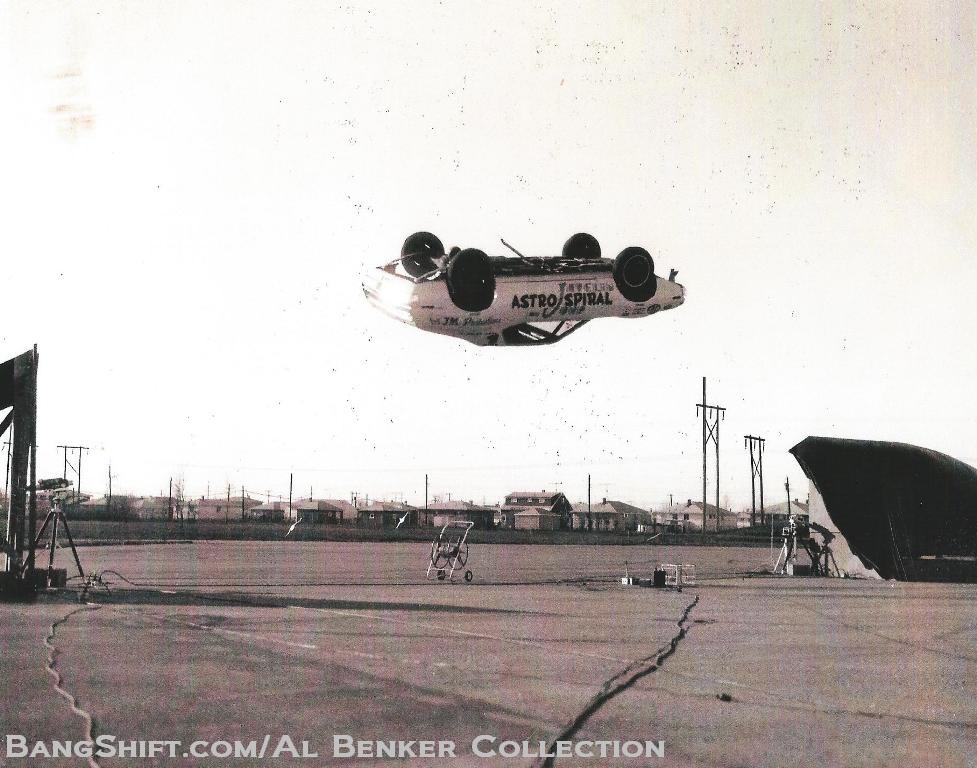 (Photos from Al Benker collection) – You are not going to find anything more awesome than the images we have below as provided to us by former Calspan welder and fabricator (and BS reader!) Al Benker. A while ago we told you about the Hemi engines that were used for decades to power the test crashes at Calspan, one of the leading testing labs in the country. Well, there is another more amazing story that came from Calspan and that is the story of the Astro Spiral Jump, which is the coolest car stunt in history according to us.

First, let’s actually explain what Calspan is, or more appropriately, what Calspan was. Formerly known as the Cornell Aeronautical lab, the facility was started by the Curtiss Wright company who had an airplane factory directly across the street. According to Mr. Benker Curtiss Wright provided the place to Cornell as a lab for engineering an development work on new aircraft. Essentially, they built a skunk works. Cornell brain power and experimentation would provide the company fodder to advance their machines. For years, that’s what they did. Then as times changed, defense needs changed, and economies came and went, they started working on everything from arms for use in war to destructive testing and analysis. It was the second part of that, the destructive testing and analysis that stuck and Calspan (renamed because Cornell students apparently revolted over having their university name on a works that was creating weapons of war at some point) pioneered lots of the foundation work for modern crash testing and vehicle dynamics testing. To this day, the operation continues in NY doing just that.

So how in the hell did some engineers get roped up into inventing a car jump so famous it was used as a centerpice in a James Bond movie? Fun, PR, and the challenge of doing it seem to be the main three reasons. On top of the photos that Al Benker provided us, we were able to locate a paper about the development of the stunt written by Raymond R. McHenry of the Calspan Corporation. It is a fascinating read and combined with Al’s experience on the project paints just a fantastic picture of smart guys, ballsy drivers, talented wrenchers, and an eager promoter coming together to form the ultimate team in making this stunt come to life.

Calspan had a computer simulator called HVOSM (Highway Vehicle Obstacle Simulation Model) that they were developing to analyze the way cars reacted in different situations, be they driving, crashing, whatever. The idea of HVOSM was to greatly advance traditional car testing which mostly measured forces in a linear fashion, meaning front to back and left to right. The fact is in a crash there are hundreds or even thousands of non-linear forces at work and HVOSM was developed to start simulating those. But we’re already ahead of ourselves.

In 1968 Calspan hired stunt drivers to come into the facility and perform a few operations, like jumping cars ramp to ramp and other stuff of that nature. The reason for this was because engineers had used computers to predict the forces and reactions of the cars doing these things and they wanted to see how accurate they were. Well, the computers were virtually perfect in their predictions after the stunt data was analyzed. Apparently the Calspan guys started joking among one another that they had literally come up with a way to create automotive stunts on the computer and know how they were going to turn out. Well one thing led to another and (maybe a drink or two at lunch) the idea for the Astro Spiral Jump was formed and tabled. 1970 rolled around and Calspan was looking for a way to really show off their newly improved and higher horsepower HVOSM simulations. The idea for the Astro Spiral Jump surfaced again when company leadership was looking for a way to gain some publicity and attention for their capability. In November of 1970, Calspan reached out to Jay Milliger who owned and operated a traveling stunt show based in NY. They asked if Milliger would be interested in this stunt. We’re sure he about leapt through the phone! Milliger agreed and paid Calspan an amount to help offset the development costs.

Enter our BS connection here, Mr. Benker. It was he who was the lead welder on the car and was responsible for the roll bars, reinforcement, and repair work as the Javelin used for jumping apparently needed to be stitched back together after nearly every jump due to the violence of the landing. According to both the report and Al Benker, Calspan did a ton of computer testing before actually attempting the feat with a real car and the first several times that they did it with a real car, it was driverless. One of the major challenges that engineers had in developing this stunt was the fact that a maximum speed of 40-MPH was mandated because Milliger’s shows were often indoors and that’s about all one could expect with limited acceleration and stopping distances. Had the engineers been given a larger speed window to work with, it would have made the development work easier because they could have spread the “spiral” out over a longer distance. The meat of the challenge was getting the car rotated quickly enough in the short span of distance between the ramps and the limited speeds involved.

There were obvious challenges, least of which was the health of the jump car. Suspension alterations, though minor, had to be made. As you can see in the first photo with the car totally upside down, there is an additional wheel mounted to the rear end of the car. This was done because as the front of the car left the ramp and unloaded, the rear of the car would start to fly and it would miss an area of the ramp the engineers referred to as the “roll impulse” area. Missing that meant that the car flew nose high and didn’t do what it was supposed to do. That extra wheel on the rear end ensured that the proper contact was made and the right flight path was taken. Pretty freaking awesome if you ask us.

Their work was detailed and right on the money. The stunt was first performed in the Houston Astro Dome in 1972. It was a sensation and Milligen would perform the stunt all over the country and most famously in the James Bond film The Man With The Golden Gun. Interestingly, Mr. McHenry, the author of the paper and we assume the lead on the project was awarded US Patent #3,814,021 on June 4, 1974 for something called a Spiral Jump Apparatus. The Calspan company was a great beneficiary of the stunt and it served as a stunning endorsement of their computer modeling and simulation abilities. We hope whichever engineer (and we believe it was Mr McHenry) that suggested the jump back in 1968 was given a raise when the dust settled and it became a reality.

We owe Mr Al Benker a huge debt of gratitude for sharing the three never before seen photos you’ll gawk at below. They are truly amazing images and their coolness is enhanced by the fact that the jump is clearly being made ad a closed test facility. Even all these years later it feels like we’re sneaking a peek at something we’re not supposed to see!

BELOW THE PHOTOS IS SOME VIDEO OF THE JUMP BEING MADE BOTH AT STUNT SHOWS AND IN THE JAMES BOND FILM! 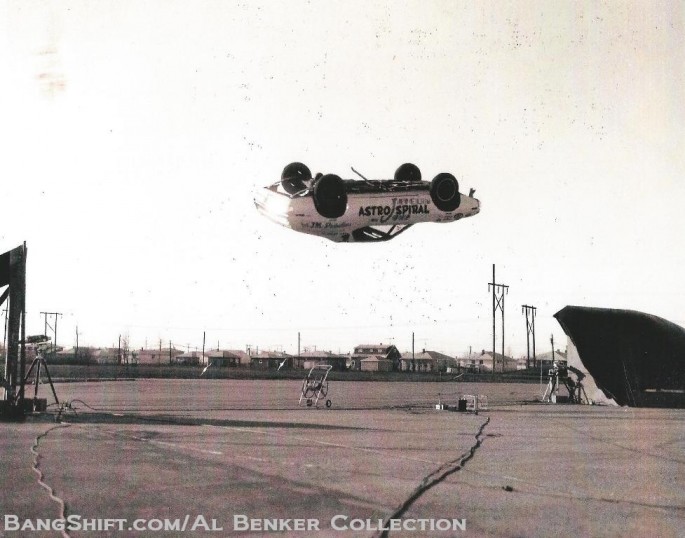 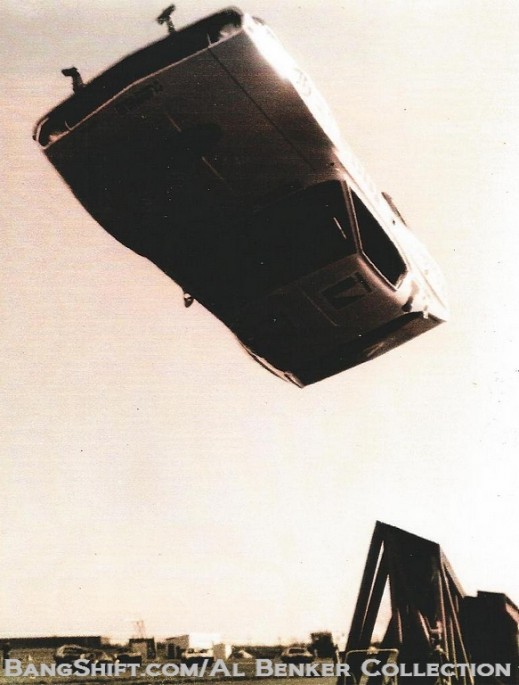 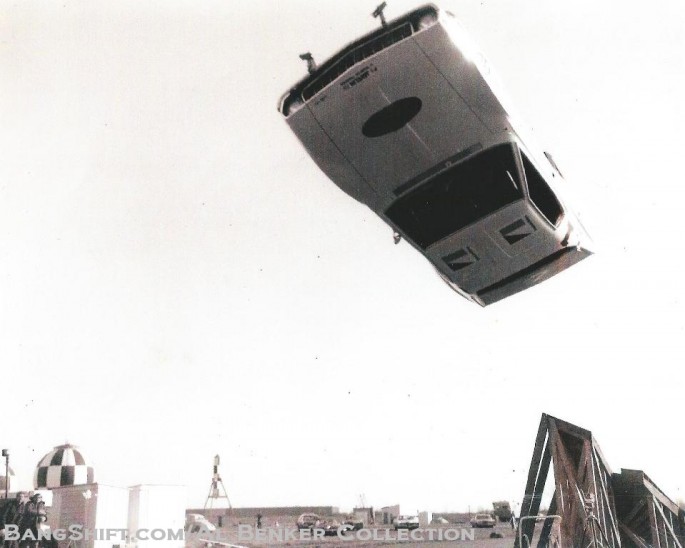